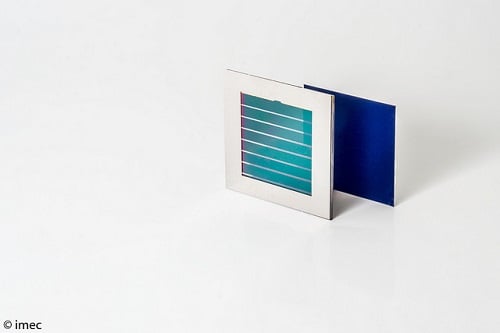 Imec says this is the first time a module-on-cell stack has been able to outperform that of a standalone silicon solar cell.

“Two innovations are key to this achievement,” says Tom Aernouts, group leader for thin-film photovoltaics at imec. “First, a different perovskite material (CsFAPbIBr) was used, largely improving the stability and conversion efficiency of the 4cm² semi-transparent perovskite module to 15.3 percent. Second, the architecture of the stack was optimized for minimal optical losses by adding an anti-reflection texture on top of the module and a refractive index matching liquid between the perovskite module and the Si solar cell.”

“Having matched areas of this size makes the fabrication technology more attractive to the solar cell industry,” Aernouts says. “For reference, we have also fabricated a stack of a small perovskite cell (0.13cm2) on top of an IBC c-Si cell (4cm2). In this configuration, the power conversion efficiency of the small semi-transparent perovskite cell is 16.7%, outperforming the larger 4cm2 perovskite module due to better perovskite layer properties. Although less attractive from an industrial point of view, the overall power conversion efficiency of this cell-on-cell stack is as high as 25.3%.”