Perovskite is proving to be the new wonder material for photovoltaics, as it can be used to produce low-cost, flexible solar cells at a considerably lower energy consumption and environmental cost relative to the more widely used silicon. However, fabrication of stable perovskite solar cells at scale has proven problematic, as the synthesis of large cells introduces defects and pinholes that undermine cell efficiency. A rapid-spray plasma process demonstrated by Stanford University researchers now promises to make module-scale manufacturing of stable perovskite cells possible.

The method uses a robotic device equipped with two nozzles to quickly produce thin films of perovskite. One 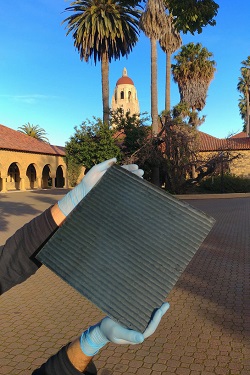 A perovskite solar module produced by rapid-spray plasma processing. Source: Nick Rolstonnozzle spray coats a liquid solution of perovskite chemical precursors onto a pane of glass, while the other releases a burst of highly reactive ionized gas, or plasma. Perovskite film can be produced at a rate of 40 ft/minute, four times faster than silicon cell fabrication rates, with this manufacturing method. The production cost of about 25 cents per square foot is also far less than the $2.50 per square foot needed to produce a typical silicon module, and the perovskite cells feature a power conversion efficiency of 18%.

Perovskite modules fabricated with the scalable large-area spray deposition technique continued to operate at 15.5% efficiency even after being left on the shelf for five months. Opportunities to improve module weatherproofing and increase module service life are now being explored.