(Editor's note: The Juno space probe is slated to reach Jupiter on July 4 and begin its scientific work there later this year. In this reprise of a 2014 article, contributing editor Bill Schweber profiled the scientist largely responsible for interplanetary missions like Juno.)

We're in awe of the successful 10-year, 4-billion-mile (6.4-billion-km) journey of Europe's Rosetta Space Probe to intercept and orbit Comet 67P/Churyumov-Gerasimenko in October 2014, and the subsequent November 12 landing of Rosetta's Philae probe on the comet's surface. The mission's achievement is the culmination of countless advances in electronic and mechanical hardware, software and other tangible items.

However, Rosetta and all other space missions also have many complex, hard-to-see aspects as well, such as the math and mechanics of deep-space astrodynamics and navigation.

The voyages of these spacecraft are possible only through the use of gravity assist for their propulsion. This exploits gravitational attraction between the spacecraft and nearby planets (and even the sun) to catapult or "slingshot" the vehicle as it travels, all without the need for rocket-based propulsion or fuel.

Without the slingshot boost, a spacecraft could not reach its destination without traveling for many additional years, assuming it could reach ever its goal, itself is a fast-moving target. In-flight rocket-based propulsion is not an option, since the amount of fuel needed would be prohibitive.

While the slingshot is now considered to be a standard--even a routine maneuver--its history shows how one person literally changed the course of spacecraft travel and exploration of our solar system. 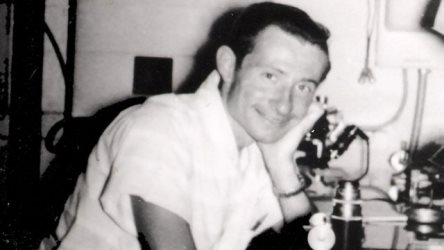 Minovitch's summer job while in grad school led to a major scientific breakthrough that reverberates today. Source: GravityAssist.comIn June 1961, Michael Minovitch, a graduate student at UCLA, got a summer job working at NASA's Jet Propulsion Laboratory (JPL) in Pasadena, Calif. His assignment was to work on an advanced but solvable problem of determining the parameters related to the conic trajectory for a free-fall vehicle passing between two given points and moving within the gravitational field of the Sun.

He presented his paper on the assigned topic in late July, but his work on the problem offered insight into a far more difficult challenge which had yet to be solved: determining the exact three-dimensional approach trajectory of a free-fall space vehicle approaching a target planet such that the planet's gravitational field, along with the Sun's gravitational field, could deflect the vehicle’s unpowered trajectory onto a new path. This was one of most difficult and famous problems of celestial mechanics: the “restricted three-body problem” for motion through the solar system.

Minovitch believed he could solve the problem by using a different perspective to define a conic orbit in three-dimensional space. By converting from a planet-centered reference frame to a Sun-centered reference frame (as he had done for his JPL-assigned research project), he realized he could develop and confirm a new theory for achieving unlimited interplanetary space travel through the solar system, but powered solely by gravity-based propulsion. He presented his results in late August 1961.

Looking at the report today is a time-machine trip back to a long-gone world: it was prepared on a typewriter, the geometric drawings were sketched by hand, and the many special characters (math symbols and Greek letters, among others) also were written in by hand.

Minovitch's results were immediately recognized as significant. They provided the solution to the long-standing problem of sending space vehicles to explore outer space without active rocket propulsion and their continuous need for fuel (other than to achieve minor course corrections) during the journey. In short: his work showed the way to achieve gravity-propelled space flight, which is truly like getting "something for nothing."

It's important to note that the gravity slingshot is not an approximate speed changer; instead, it can be calculated to allow for a carefully executed maneuver that changes the vehicle's momentum and either accelerates or decelerates the space vehicle's speed and trajectory. Rosetta, for example, received gravitational "kicks" from close flybys of Mars (2007) and Earth (2005, 2007 and 2009).

Minovitch’s results were soon applied to interplanetary missions. Mariner 10 was launched by NASA in November 1973 to fly past Mercury and Venus. More ambitiously, gravity assist was used for the solar-system "Grand Tour," which exploited the fortuitous alignment of Jupiter, Saturn, Uranus, Neptune and Pluto which occurred in the late 1970s and then not again for 175 years. 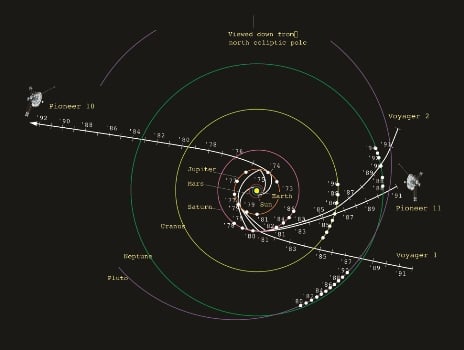 How the slingshot effect has sent spacecraft on journeys through the solar system. Source: NASAVoyager 2 was launched in August 1977, flew by Jupiter and received trajectory boosts as it passed Jupiter, Saturn, Uranus and Neptune. The identical Voyager 1 launched the following month and received similar assists. Not only did these spacecraft exceed their original goals, but they are still traveling and sending back data nearly 40 years later, having crossed the boundary of our solar system and entered interstellar space. (NASA's Where Are the Voyagers? page.)

Sir Isaac Newton's often-repeated quotation "if I have seen further than others, it is by standing upon the shoulders of giants" is true of Minovitch's insight and subsequent proof of a way to achieve space flight assisted solely by gravity. His work was not just a modest extrapolation to the "next step" in astrodynamics. Instead, it shows how one person can see past sophisticated and complex extensions of existing knowledge to envision a radically new solution to an apparently unsolvable problem.

By posting a comment you confirm that you have read and accept our Posting Rules and Terms of Use.
Advertisement
RELATED ARTICLES
Space Launch System Will Propel Orion on Exploration Missions to the Moon
5 sites to celebrate 50 years of Apollo 11
Solar-powered Spacecraft Notches Record
Harvesting Near-Earth Asteroids to Fuel Human Expansion into Space
The “Right Stuff” for Innovative Engineering Teams
Advertisement