NASA contacts Voyager 2 for the first time since March 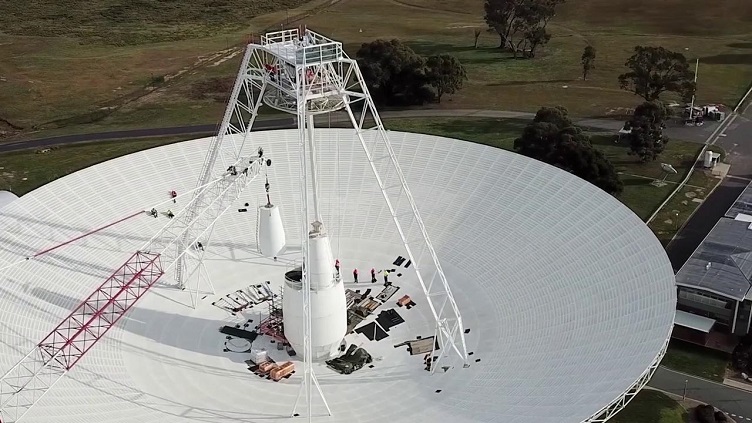 The Deep Space Station 43 radio antenna that is the only deep space communication device capable of contacting Voyager 2 sent commands to the spacecraft for the first time since March. Source: NASA

The only radio antenna that can communicate with the 43-year-old spacecraft, called Deep Space Station 43 located in Canberra, Australia, has been offline for repairs and upgrades. Voyager 2 returned a signal confirming it had received communication from NASA and executed the commands without issue.

Contact was established with Voyager 2 to test new hardware installed on Deep Space Station 43. The station is part of NASA’s Deep Space Network (DSN), a collection of radio antennas around the world used to communicate with spacecraft operating beyond the moon. Since the station went offline, NASA has been unable to receive health updates or science data from Voyager 2 or to send commands to the deep space probe.

The upgrades include two new radio transmitters and upgrades to heating and cooling equipment, power supply equipment and other electronics needed to run the new transmitters. NASA said it hopes the radio antenna will be fully back online in February of 2021.

"What makes this task unique is that we're doing work at all levels of the antenna, from the pedestal at ground level all the way up to the feedcones at the center of the dish that extend above the rim," said Brad Arnold, the DSN project manager at NASA's Jet Propulsion Lab in Southern California. "This test communication with Voyager 2 definitely tells us that things are on track with the work we're doing."

Voyager 2 is a unique case in terms of space probes. In 1989, Voyager 2 flew close to Neptune’s moon Triton. The trajectory deflected it southward relative to the plane of the planets and it has been heading in that direction ever since. Now it is more than 11.6 billion miles from Earth, so far south that it does not have a line of sight with radio antennas in the Northern Hemisphere. DSS43 is the only dish in Earth’s Southern Hemisphere that is powerful enough to broadcast the right frequency to send commands to Voyager 2.

Voyager 1 took a different path past Saturn and can communicate via antennas at the two other DSN facilities in the Northern Hemisphere.

While the other antennas in the DSN can be used together to capture the signals that Voyager 2 sends back to Earth, they cannot send any signals to the spacecraft to get health information or data on its instruments. The probe is sending back science data from interstellar space — the region outside of the Sun’s heliosphere, the protective bubble of particles and magnetic fields created by the Sun that surrounds the planets and the Kuiper Belt.

The repairs and upgrades to DSS43 will benefit other missions for NASA including the Mars Perseverance rover and will play a critical role in the moon to Mars exploration efforts for communication and navigation support for both the precursor moon and Mars mission as well as the crewed Artemis missions.

By posting a comment you confirm that you have read and accept our Posting Rules and Terms of Use.
Advertisement
RELATED ARTICLES
After 40 Years, the Voyagers Continue
Hubble Space Telescope: The Bad, the Ugly, and (Finally) the Good
Gravity Slingshot: How One Grad Student's Insight Launched Interplanetary Exploration
Watch: Recent Developments in the Race for Space
Video: NASA Wants to Pump You Up for Future Space Travel
Advertisement