Hubble Space Telescope: The Bad, the Ugly, and (Finally) the Good 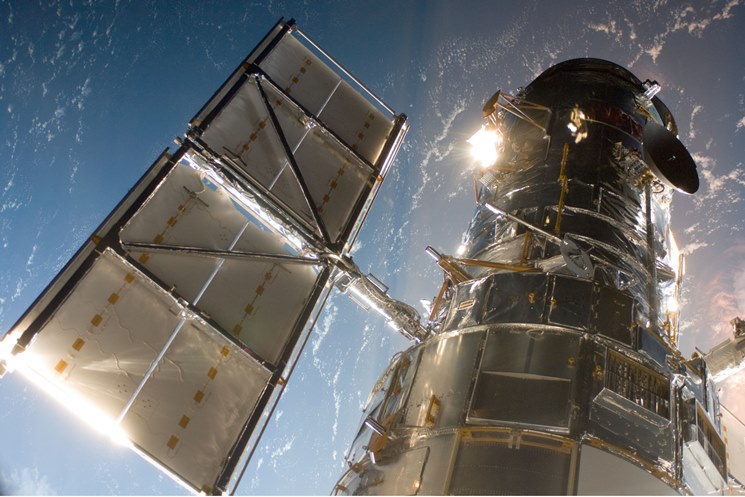 People everywhere have been awestruck over the past decades by images taken by the Hubble Space Telescope (HST). Those images have been captured using a variety of optical instruments and sensors.

But many people also recall the problem discovered right after launch: how an error in fabricating the primary mirror resulted in out of focus, useless images.

Now, as the Hubble telescope nears the end of its life and as NASA prepares to launch its successor, the James Webb Space Telescope (JWST) in 2018, a look at the Hubble's history offers a tale of what can happen when "big science" meets budget and bureaucratic reality. The HST also serves as a lesson in how technical mistakes can slip through supposedly rigorous quality checkpoints. 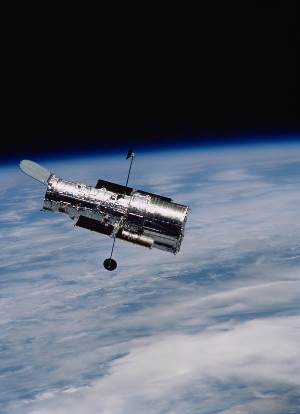 The Hubble Space Telescope has produced tens of thousands of stunning visible-light and infrared images of the universe. Image source: NASA. From Concept to Launch

In 1977, the U.S. Congress approved initial project funding. Among the reasons for the long review were budget constraints (after all, the Space Shuttle project was also underway), but also worries over "too much telescope." Congress had recently funded a number of ground-based optical and radio telescopes, and many lawmakers couldn't understand why another telescope was needed. The initial HST budget was around $500 million, excluding launch and ongoing operating expenses.

Hubble was deployed by Space Shuttle Discovery in April 1990, more than a decade after its initial funding was approved. Project delays were caused by a combination of budget issues, personal politics, bureaucracy, and technical issues. Among these:

•Budget: the original cost estimate was too low, so NASA had to go back to Congress for more funding every few years. The final cost came to roughly 10 times the original estimate, but was still hard to account for accurately because the Space Shuttle played such a large role in the launch, operation, repair, and maintenance.

•Personalities and politics: conflicts erupted over who would run which parts of the program. Leadership shifted many times as alliances waxed and waned. Beyond the personal politics, institutional issues emerged in terms of which university, research center, or consortium would lead the project and which ones would "own" various parts.

•Bureaucracy: Because this was a huge and highly visible project, turf battles were a constant source of tension between NASA and non-NASA interests with shifting alliances, demands, objections, counter-proposals, and compromises.

•Technical issues: although to be expected in a project as complicated and sophisticated as Hubble, problems proved more challenging than anticipated. One of the major ones involved solid-state, digital-imaging sensors that were available during the Hubble design phase but were relatively low performance with respect to their sensitivity, resolution, and size. Indeed, CCD and CMOS imagers with suitable specifications simply were not available at the time.

Engineers considered using a conventional film-based camera and having Hubble eject the film periodically for Earth-based retrieval. The scheme was a complicated procedure that had been used successfully in U.S. "Corona" spy satellites in the 1960s and 1970s. But even if a suitable digital-image sensor was available, the communications links for transmitting the digitized images were slow, so downloading a single image could take hours. New and better sensor technologies were developed and solved the problem, but required more design time and testing.

Then there were the lenses. When Hubble's lens cover was first pulled back and the imager was exposed to "first light," few people expected perfect images, as many calibrations still were required. Even so, no one was ready for the fuzzy, almost useless images that emerged. Part of the problem was that the telescope itself was vibrating as its solar panels expanded and contracted as it passed from light to dark during its orbit. It took about 30 minutes for the vibrations to damp themselves from each transition.

But the focus was still terrible, and the Hubble team examined every possibility. Eventually, the unthinkable was found and confirmed: the 2.4-meter primary mirror had been measured and ground incorrectly at the vendor, Perkin-Elmer (subsequently renamed Hughes-Danbury Optical Systems, after a change in ownership). 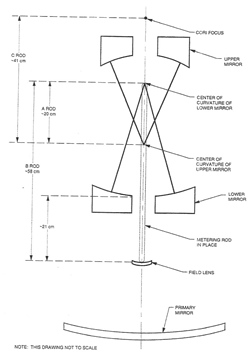 (Click to enlarge.) The overall arrangement of the mirror and lenses within the null corrector, as well as the precision metering rod used to position them properly.Apparently, the super-precise metering rod the test team used in the highly sophisticated optical-test fixture, called a null corrector, was not set up properly. As a result, the test-system laser saw a reflection from the wrong part on the rod. To compensate, technicians inserted a handful of washers to "correct" the problem– except they didn’t correct it, but merely accommodated it. The mirror was final-ground with a precise but incorrect curvature.

The result was spherical aberration in the mirror/lens assembly. As part of its fact-finding, a team of investigators eventually went back to the mirror-grinding facility. Even though it had been closed for many years, they found the test room, the measurement rod, and even the washers that were used for the "fix.”

Having identified the source of the problem, the next task was to solve it. In principle, the investigators had a known problem existed, and several promising solutions for corrective lenses were available. In practice, however, none of the approaches would work. The lens assembly would not only have to fit for the main imager, but also would have to work for the array of specialized scientific instruments.

What’s more, any solution would have to be installed by astronauts on a Space Shuttle flight. The astronauts would catch and pull Hubble into the Shuttle's cargo bay, do the repair work, then push Hubble back into its orbit. 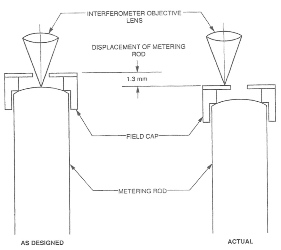 (Click to enlarge.) How the 1.3 mm error was introduced when the laser reflected off the field cap (right image) rather than the end of the measuring rod (left image). Image source: NASA and "The Universe in a Mirror: The Saga of the Hubble Telescope and the Visionaries Who Built It."Eventually, a solution was developed using a long rod which held multiple lenses on swing arms. Lenses of the Corrective Optics Space Telescope Axial Replacement (COSTAR) unit, built by Colorado-based Ball Aerospace – each on its own arm – would be swung into place. The design and confirmation of this solution, as well as plans to work out the installation procedures, took more than a year; it also took astronauts more than a year of practice before they could undertake the repair in space.

While the mainstream press ridiculed the mistake, they also made it sound as if the fix was as easy as putting on eyeglasses or contact lenses. It was not: the repair almost did not happen due to mechanical issues that included jammed and distorted panels. Indeed, the repair took far longer than planned and only the ability of the astronauts to improvise while spacewalking “on the fly” made it successful.

Many lessons can be gleaned from this expensive and time-consuming error.

•Political and bureaucratic infighting can delay a project for years. While delay can be detrimental to a project’s viability, it also allows time for new technologies to be developed. At the same time, however, delays and associated costs can add and render a project obsolete before it is completed.

•A tight launch window helps. Interplanetary spacecraft have narrow and infrequent launch windows (consider the one-month launch window every few decades for the Voyager 1 spacecraft due to planetary motion and alignments). By contrast, Hubble could be launched into its Earth orbit at almost any time. As a result, the incremental delays were not mission-killers. 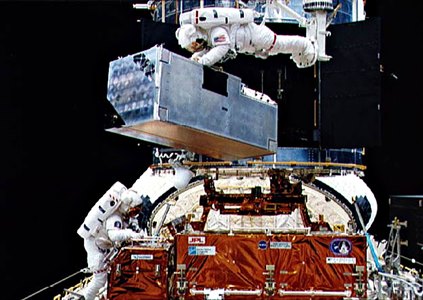 Shuttle Endeavor astronauts move replacement parts into the HST. Image source: European Space Agency.•Test and verify everything, and then have an independent group re-do the tests, preferably using a different technique. This was recommended for the Hubble mirror by one expert team but was ruled out due to presumed time constraints. In the end, extra time for testing was available due not only to Hubble project delays but also due to the Space Shuttle Challenger explosion in January 1986.

Operation of the Hubble changed the model for operating telescopes. Before Hubble, all large telescopes were operated by their "owner," usually a single academic institution. In contrast, Hubble is accessed via a consortium which makes the decisions and does all operations management, including orbit fine-tuning, imager pointing, and calibration.

Today, even all large-ground based telescopes are managed and operated (largely remotely) via similar consortiums, such as the Very Large Telescope located in Chile which is operated by the European Southern Observatory.

In the past, the astronomer took the resultant photo plates and "owned" the images; no one else saw them until he or she released them. With Hubble, there was a feeling that the public had paid for the technology, so should see the images right away. The issue was resolved via a multistage process. In general, stunning but not technically significant images have been released to the public, while possibly significant data has been held back for researchers.

Even without the lens problem, Hubble has required a lot of work. Gyros have repeatedly failed (for reasons that are not entirely clear) and had to be replaced; batteries have needed regular replacement; scientific instruments have been replaced due to failure or to upgrade to better ones; and the vibrating solar panels had to be removed and replaced with sturdier ones. None of this could have been done without a repair-friendly design; the regular availability of the now-retired Space Shuttle; detailed plans and procedures for the work to be done; and time to practice it on Earth. Impromptu, improvised repairs may be possible in some cases or the only option, but don’t count on them being successful.

The Hubble telescope was supposed to retire in 2015, but had its life extended due to delays with its successor, the James Webb Space Telescope (JWST), now scheduled for launch in 2018. The JWST features a larger 6.5-meter (21-ft) diameter primary mirror, made in segments as a gold-coated beryllium reflector. Compared to the Hubble's 2.5-meter mirror, it will have a collecting area about five times as large (25 m2 vs. 4.5 m2). 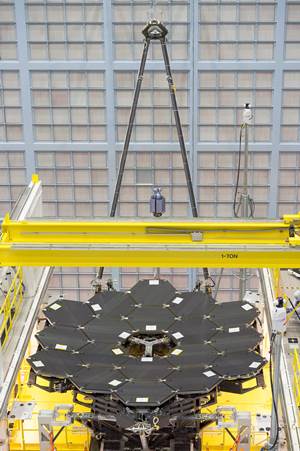 The primary mirror of the JWST's IR telescope is composed of 18 sections weighing 20 kg each, and having an overall diameter of 6.5 meters. Image source: NASA.JWST will not orbit Earth, but will occupy a Sun L2 Lagrangian "parking" point. A Lagrange point is a location in space where the combined gravitational forces of two large bodies, such as the Earth and the Sun, equal the centrifugal force felt by a smaller third body. The result is that the third body appears "stationary" with respect to the larger ones. A sunshield will keep its mirror and science instruments at a temperature below 50 K (−220 °C/−370 °F) so random thermal motion does not interfere with sensitive readings.

The project was initially funded in 1996 with contributors including the European and Canadian Space agencies. JWST is designed for a useful life of 5-10 years. Early estimates pegged the observatory’s cost at $1.6 billion and launch in 2011; the project was killed by Congress but funding was later restored. With a budget now at around $8 billion, a 2018 launch is now planned.

•Robert Zimmerman, The universe in a mirror: the saga of the Hubble Telescope and the visionaries who built it,

•NASA: A Brief History of the Hubble Space Telescope

•Physics Today, Saving Hubble: A conversation with the director, June 12, 2012

Dwayne A. Day, John. Logsdon, & Brian Latell, Eye in the Sky: The Story of the Corona Spy Satellites

By posting a comment you confirm that you have read and accept our Posting Rules and Terms of Use.
Re: Hubble Space Telescope: The Bad, the Ugly, and (Finally) the Good
#1

Hell have the elite ant the