Video: Shopping for Printers That Make Your Dinners 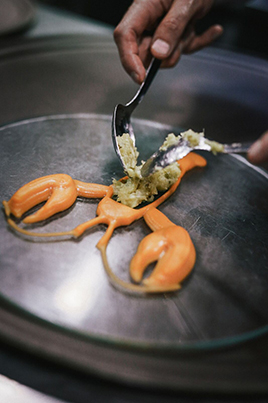 If you’ll forgive the pun, 3-D food printing is one of those technologies that still seems a little too much like science fiction to swallow.

True enough, applying the principles of additive manufacturing — building objects by adding layer upon layer of material — to the culinary world is a technology that’s still in its infancy. The food you can produce with a printer is limited by the fact that its ingredients need to fit through a small nozzle, and the dishes still need to be cooked separately. Print times are also slow. Yet you might be surprised by just how “additive” the process can be, in terms of what you can create, in whole or in part, by 3-D printing.

Take the example of a 3-D-printed pizza — a dish that we generally think of as being built in layers, even in its traditional form. Just about any raw ingredient that can be puréed and blended into a semi-liquid form can also be loaded into a food-safe capsule and extruded from the print head, so getting a printer to lay down the dough base isn’t too much of a stretch. Load in a new capsule, and the printer can apply tomato sauce. Add the cheese by hand, pop it into the oven — and voilà!

Take a look at the website of Natural Machines, developer of the Foodini, and you’ll get a good sense of the range of possibilities (the pizza described above is one of them). It’s a beautifully-designed appliance, and boasts the ability to print food in under a minute, but alas — it’s not yet available for purchase. When it does become available, according to the company, early production runs will produce devices with a price tag of $4,000. (To put that in a little bit of perspective, when the now-ubiquitous microwave oven first started appearing in relatively-affordable form in the mid-1960s, it had a price tag around $500. Half a century later, that would translate to around $3,660 today.)

What is currently on the market for consumers is fairly limited. At one end of the scale is the PancakeBot, which started as a whimsical Maker Faire display made out of LEGO blocks. Thanks to support via Kickstarter, it’s now a refined 3-D appliance made to do one thing: print pancake designs. You can get your hands on one of those for $299. 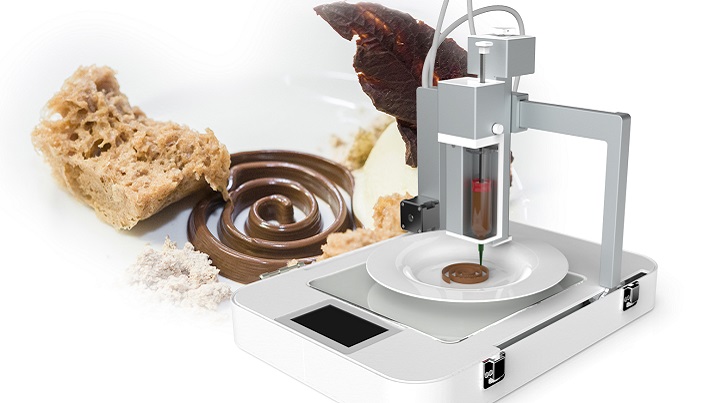 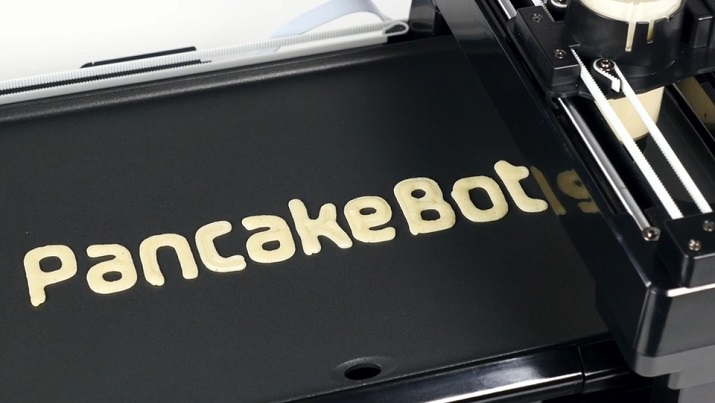 Most other products are priced in the $3,000 to $4,000 range, like the Focus 3D printer. This model, manufactured by Netherlands-based byFlow, folds into a portable device (think of the possibilities for catering) and comes with reusable cartridges that can be filled with a variety of different ingredients. No special operating system is needed; it runs on open-source software, connects via Wi-Fi and is controlled by a web browser. Once a design file is uploaded into its memory, it can operate as a standalone device. 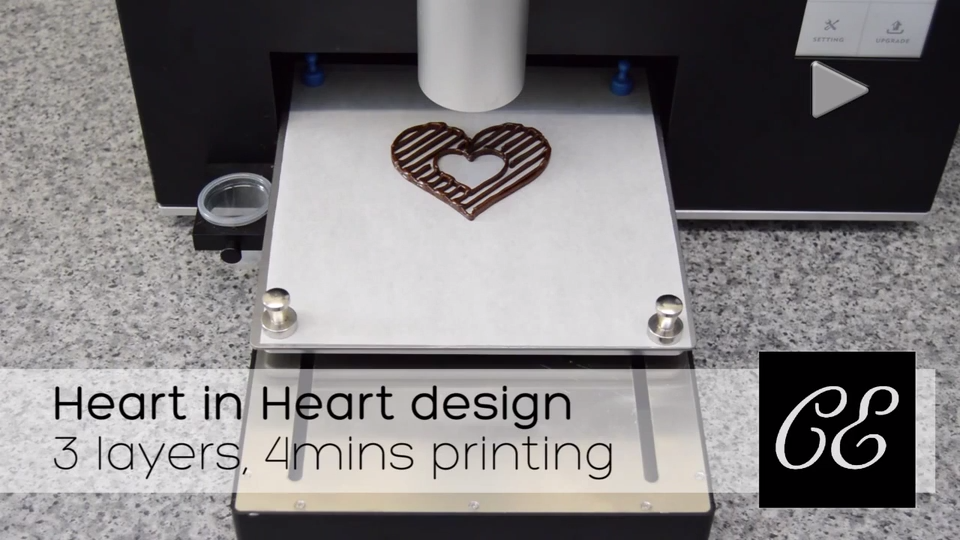 The Choc Creator 2.0 Plus prints precise lines of chocolate. Image credit: Choc EdgeIn the same price range is the Choc Creator 2.0 Plus, designed to print accurate 0.8 millimeter lines of chocolate — much finer and more precise than manual-piping techniques, according to U.K.-based manufacturer Choc Edge. The basic package includes several two- and three-dimensional pre-installed designs, but does not include modeling software, melting equipment (a professional tempering machine is recommended, although by-hand or microwave melting is also acceptable) or, not surprisingly, the actual chocolate itself (Belgian dark chocolate is recommended due to its high level of cocoa solids). 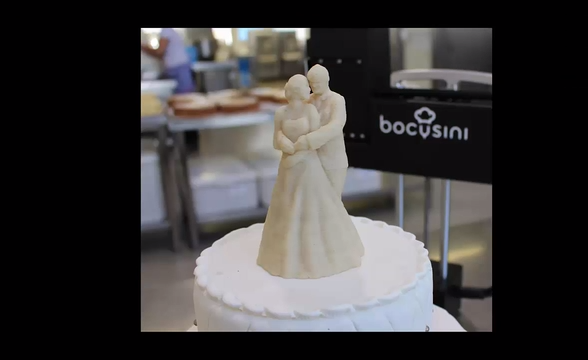 The Bocusini Pro 2.0 can create a wedding cake topper that bears more than a casual resemblance to the couple. Image credit: Bocusini.com

There’s also the Bocusini Pro 2.0, designed by German company Print2Taste with wedding professionals in mind — a mobile 3-D scan system can capture a couple’s likeness, which the printer can then print in highly-personalized detail as a marzipan wedding cake topper. With this system, you can either add your own raw materials to the print cartridges (printer settings exist for soft mixtures like potato purée and hummus) or purchase prepared refills (both chocolate and marzipan are available; in U.S. dollars, either type goes for around $45 plus tax — not unlike what you probably pay for ink jet refills for a conventional home-office printer). The machine can interface with your iPad and work as a plug-and-play system (again, it'll set you back just over $3,000 for this option), or it can be ordered as part of a bundle with a tablet and 3-D camera (approximate cost in U.S. dollars is just under $5,000, not including shipping). 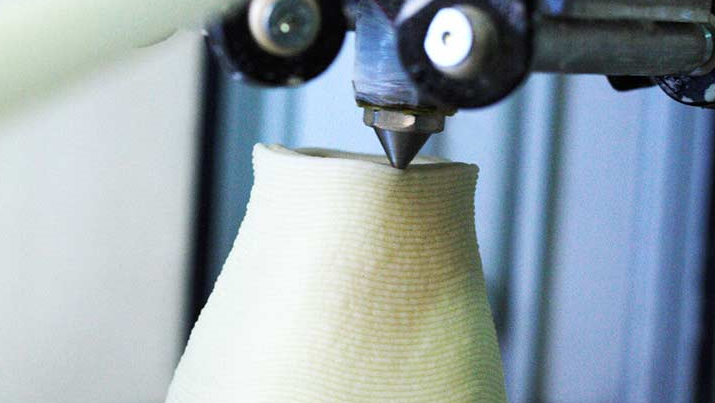 WASP's gluten-free system in action. Image credit: wasproject.itAnother development: Italian 3-D printing company WASP, whose printers were used to create the plates and glasses for the pop-up 3-D restaurant experience Food Ink, is currently developing a system that can produce gluten-free food — a proposition that can be difficult to do in a typical multipurpose kitchen, due to the potential for contamination from other foodstuffs all around.

All things considered, though, it might be a little early to invest in a 3-D food printer, unless you (or your business) have some definite use for the specific capabilities of one of the few models currently on the market. But there are multiple industries behind the technology, which in the bigger picture has the potential to contribute to agricultural sustainability, cut transportation costs and reduce wastes — and could even be instrumental in combating world hunger or feeding astronauts in space. All of that adds up to 3-D food printing being more than just another passing fad.

By posting a comment you confirm that you have read and accept our Posting Rules and Terms of Use.
Advertisement
RELATED ARTICLES
Video: Three 3D Printing Industries
Moving Into 3D Parts Printing
3D Printer Achieves a First in Space, NASA Says
MIT Develops Multi-Material 3D Printer
3D Printer from Makerbot for Schools and Small Businesses
Advertisement