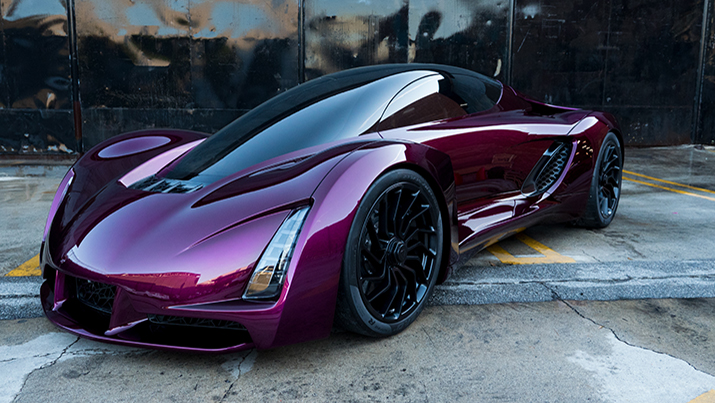 The number is apt: we’re talking about 3D printing. The additive manufacturing technology is moving into the mainstream, putting the tools for creation into the hands of small-business startups and entrepreneurs.

The First Industrial Revolution, stretching from the late 1700s into the early 1800s, introduced machines to replace hand labor and saw the rise of the factory system; the second, taking place around the turn of the 20th century, saw widespread adoption of technology driven by the advent of mass transportation and the principles of mass production. As we move forward into the 21st century, the means of translating innovative ideas into physical form is no longer dependent on large investments or years of development. Complex prototypes can be rapidly developed; crowdsourcing via social media can be tapped for startup funds; on-demand customization can be affordably produced. The means of production are now as simple as a digital file that can be produced by a 3D printer anywhere in the world.

Industry stands to be transformed by this “Third Industrial Revolution” in ways that are so wide-reaching it’s hard to know where to look first. We decided to take a closer at the technology’s impact on a small number of industries – you guessed it, three – that give a good indication as to some of the places the revolution is headed. 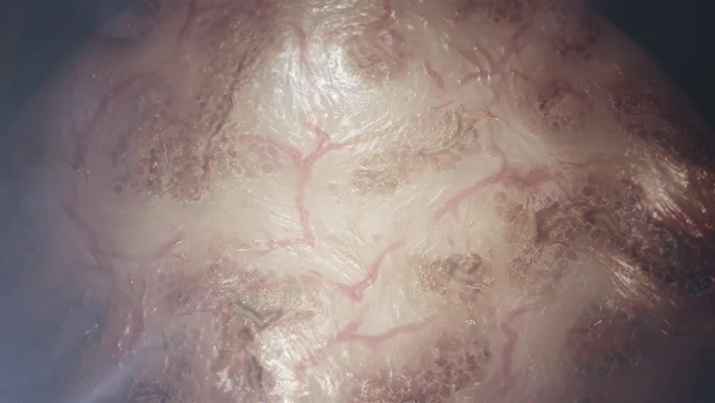 Stage in the process of bioprinting. (Credit: Organovo Holdings, Inc.)In the arena of medicine, bioprinting companies like San Diego, California-based Organovo can design and create functional human tissue. The technology has expanded the research possibilities for disease modeling and toxicology; accelerated pre-clinical drug testing and discovery; and provided functional implants that can be used to repair or replace damaged or diseased tissue.

Bioprinting began in the early 2000s, when researchers discovered that living cells could survive spraying through inkjet printer nozzles. By employing polymers to keep a structure in shape, it is now possible to print multiple layers of cells that will bind together and grow into living tissue. Researchers have successfully implanted 3D-printed bones and muscles into animals, and even working prosthetic mouse ovaries able to produce healthy offspring. It may become possible to print entire human organs in the not-too-distant future.

In March 2017, in fact, Organovo presented the first data showing survival and sustained functionality of 3D bioprinted human liver tissue – not a whole organ, but essentially a liver “patch” – when planted into animal models. The company is targeting the year 2020 for getting liver patches into human patients, which can extend their lives another one or two years while they remain on the waiting list for an eventual transplant. The total market opportunity for therapeutic liver transplants, according to the company, exceeds $3 billion in the United States alone. 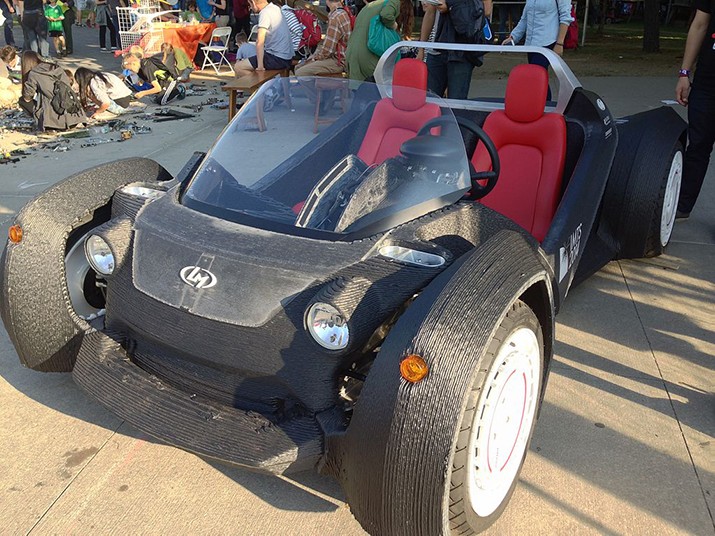 Local Motors Strati (Credit: z22/Wikimedia Commons)In 2014, Phoenix, Arizona-based Local Motors organized a crowdsourcing design challenge that translated into an electric car with heavy utilization of 3D printing in its production process, the Strati (an Italian word meaning “layers”). The vehicle is made of a recyclable thermoplastic that can be chopped and reprocessed for printing another car.

For the industry, however, the main driver (no pun intended) of the technology is not printing entire vehicles, but tooling and end-use parts. Such applications can reduce time and costs. For example, traditional multiple-part assemblies can be combined into a single printed part that take less time to produce. They can also help the industry meet increased regulations that call for building maximum strength into minimum weight and material.

Industry needs are also pushing 3D technology toward increased capabilities for printing metals such as aluminum alloys, and plastic composites that employ carbon or glass fiber for reinforcement.

Los Angeles-based startup Divergent 3D has created a manufacturing platform that uses 3D-printed joints to connect carbon fiber structural materials, and can produce a lightweight, industrial-strength chassis that can be assembled in a matter of minutes. Known for their 3D-printed supercar Blade, the company is particularly focused on reducing environmental impact, noting on its website that the traditional production of “cleaner and greener cars” has had something of a hidden impact of the amount of emissions produced: while gasoline vehicles produce more pollution through operation, electric cars outpace them as polluters through both vehicle and fuel manufacturing.

A report by SmarTech Publishing estimates the 3D automotive printing market will reach $2.3 billion in revenue by 2021. 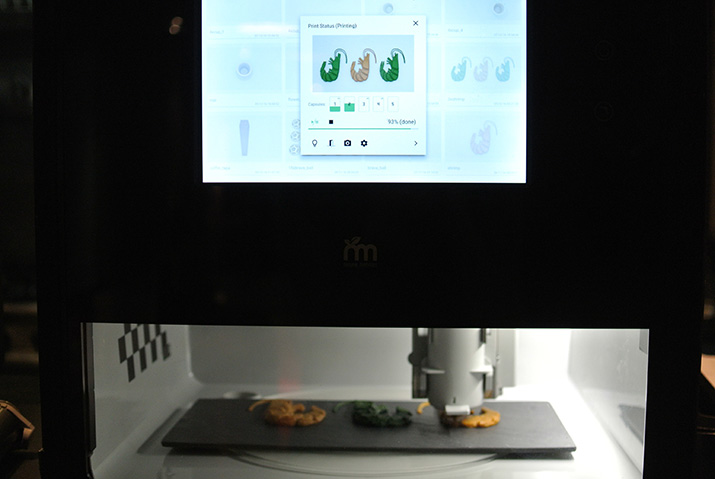 Star Trek fans, this one’s for you: the replicator from which Capt. Picard conjures up “Earl Grey, hot” on demand may be on its way to becoming a reality.

Natural Machines, based in Barcelona, Spain, is one of the companies developing a device for 3D food printing. The company’s Foodini machine doesn’t whip up foods from the ether – a user provides it with natural, fresh ingredients. The technology comes into play as a way of automating some of the more rote cooking activities – shaping, forming, layering – that are the reason many people gravitate toward sodium-filled frozen dinners and high-calorie trips through the drive-thru instead of taking the time to prepare healthy meals. According to the company, the device will make it possible to print foods in less than a minute.

Along the same lines, London-based Food Ink has been touring its pop-up 3D-printed restaurant experience throughout Europe, with a world tour that will include major U.S. cities in the works (dates TBA). Staged within an immersive, futuristic space, the Food Ink restaurant uses 3D printing to create not only food – but all the utensils and furniture, too.

And lest you think this is all just for fun, consider that 3D food printing may contribute to agricultural sustainability. There is research being done on printing hydrocolloids – substances that form gels with water – to replace base ingredients with renewables like microalgae. Future grocery stores might also replace perishable ingredients with long-life food cartridges that can be printed as needed, reducing transportation and storage needs.

MarketsandMarkets recently issued a report stating that the 3D food printing market is expected to grow at a compound annual growth rate of nearly 55% between 2018-25, with a value of $425 million by the end of that period.

While there’s no question of the vast potential of 3D printing, well-established methods of mass production are liable to remain the ideal route for aspects of industry that already are well-served by standardization. Not every product stands to reap significant benefits from the core benefits of additive manufacturing, such as on-demand customization.

Yet we are already seeing the introduction of products impossible to make with traditional manufacturing technologies – new categories of products that, not long ago, could only be dreamed about, if they were even imagined at all.

The revolution is here.

By posting a comment you confirm that you have read and accept our Posting Rules and Terms of Use.
Advertisement
RELATED ARTICLES
Bioprinting Making Science Fiction a Reality
Watch a breakthrough in bioprinting replacement organs
Video: Full-scale human heart models are 3D printed
Watch a FRESH approach to 3D bioprinting
Video: Artificial organ growth supported by 3D-printed fluid system
Advertisement