Lab-on-a-chip Technology Evolving to Save Lives 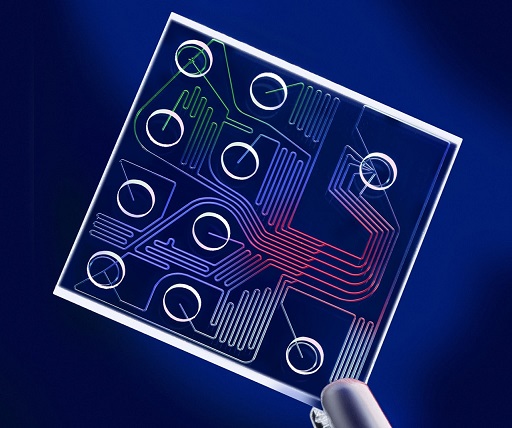 In the medical sciences, it’s generally accepted that early diagnosis saves lives. Heart disease, cancer and many other less common diseases all show increased survival rates if identified early on and treated. Diagnosis is an area where devices known as Lab-on-a-chip (LOC) can really shine. LOCs are devices that integrate one or several laboratory functions onto a chip. LOCs can handle fluid volumes on the order of picoliters, making it possible to separate and filter components of a biological fluid and deliver them to be analyzed.

The past few years, LOC research has accelerated, with many new devices being conceived and tested. Many of these devices are focusing on detecting biomarkers in the blood or sweat. Biomarkers are indicators of health and disease, such as proteins or DNA molecules. Often, multiple diseases or health issues can produce the same biomarker. For instance, both cancer and heart disease can produce biomarkers associated with inflammation. However, less dangerous conditions such as muscular fatigue can cause the same biomarker. Thus, for accurate diagnosis, LOCs must identify many biomarkers so as to better identify the health issue being detected. The more biomarkers detected, the clearer the diagnosis.

In order to be effective, LOCs must have access to the blood or sweat of the patient being analyzed. Currently, this is done at a medical facility through swabbing or removing blood, though some devices used by diabetics and other patients with chronic diseases are designed to be used in the home. One major goal of the companies working on LOCs is their integration into wearable devices that could communicate with a user’s phones, tablets or laptops, which then could use software to analyze the output and identify potential health issues. Beyond diagnosis, clinical trials would benefit greatly from the additional data that would come with the constant monitoring of groups of patients. Certainly, the large amount of data available from people integrating wearable devices would lead, through data analysis, to a much better understanding of the causes and warning signs of diseases.

Another opportunity for LOCs in the future is as implants for monitoring blood sugar. Diabetes is one of the fastest growing diseases in the world with an estimated over 350 million patients worldwide according to the International Diabetes Federation. By taking a continuous flow of blood from well-vascularized connective tissue, implants that monitor blood sugar could microdose with insulin leading to far more reliable blood sugar levels and less harmful blood sugar spikes. Patients suffering from heart disease could also benefit from an implant that monitors blood markers and monitors for the warning signs of an impending heart attack, notifying a patient's phone to contact emergency personnel. This of course would have to be carefully developed to minimize false positives, but the potential benefits could be huge since heart attack survival rates correlate with first responder’s time getting to the patient. Patients undergoing chemotherapy could benefit from an implantable LOC as it would help their doctor provide the optimal dose that would reduce the risk for patients while being as effective as possible killing cancer cells.

All of the examples mentioned in this article are currently being researched and pursued by universities and research organizations, as well as private companies around the world. The number of applications for LOCs are many and the public interest in seeing such devices come to market is huge. In the United States, a growing obesity crisis coupled with an aging population offer a large market opportunity for LOCs. The technology has been pursued in earnest since the mid-90s and is starting to mature to the point where there will be an increasing number of LOC devices available to the public. It may not be long before our doctors download our blood work from our phones and chronic diseases are better regulated by implants. With such improvements in medicine, we all will undoubtedly benefit.

By posting a comment you confirm that you have read and accept our Posting Rules and Terms of Use.
Advertisement
RELATED ARTICLES
Digital and Analog Modes Merge in Microfluidic DiagnosticEn
Biosensor Technology for Wearables that Monitors Health and Exposure to Dangerous Microorganisms
Quick Detection Method for Early HIV Diagnosis
Organ-On-a-Chip Device Models Heart Disease
Paper Strip for Home-based Heart Disease Tracking
Advertisement