A portable device that identifies different disease biomarkers from small quantities of blood is under development by researchers at Switzerland's École Polytechnique Fédérale de Lausanne (EPFL). The battery-powered microfluidic diagnostic can quantify up to 16 different molecules -- or biomarkers -- in a blood volume of less than 0.005 milliliters. 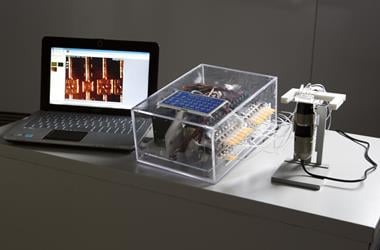 New microfluidic platform detects biomarkers for Ebola, other diseases, without complex equipment. Image source: Alban Kakulya. Initial testing has been carried out on a sample containing anti-Ebola antibodies, which indicate the presence of the virus in both symptomatic and asymptomatic patients. The blood sample can be loaded directly onto the device for on-chip biomarker quantitation without requiring any sample pre-treatment. This eliminates the need for blood plasma separation and the associated centrifuge equipment, large volume samples and long processing times.

Using these two detection mechanisms simultaneously, the composition of a drop of blood can be analyzed in a short amount of time. The analysis provides useful medical information, and could help doctors make an early diagnosis or determine the stage of a disease.