The economic and environmental effects of aircraft emissions are considerable, and reducing emissions is the subject of research at numerous companies and organizations around the world.

If commercial aviation were a country, it would rank seventh in global greenhouse gas (GHG) emissions according to a recent report by the International Council on Clean Transportation (ICCT).

Airline GHG emissions are expected to triple globally by 2050, if present trends continue to grow. Carbon dioxide (CO2) emissions from aircraft account for approximately 2% of the total GHG emissions. In addition, the total contribution of aviation to the radiative forcing from all human activities is about 3%, according to reports by the Intergovernmental Panel on Climate Change.

The potentially harmful chemical by products of burning jet fuel are not limited to CO2; they include carbon monoxide (CO), nitric oxide (NO) and nitrogen oxide (NO2), sulfur oxides (SO2) and soot.Hence, reducing emissions from aircraft is important to a wide range of stakeholders, and the approaches being taken to realize this goal are numerous.

Fuel consumption can also be reduced by improving aircraft routing and flight profiles. This includes more direct routes and less circling over airports waiting for clearance to land. The so-called Optimized Profile Descent (OPD) pattern involves the aircraft descending at idle power from cruise altitude to the ground. Compared to the common "step" pattern of leveling-off in stages during descent, OPD landings minimize fuel usage. Fuel usage also can be reduced by using ground power instead of aircraft power when an airplane is at the gate. Biofuels also have the potential to reduce net carbon emissions if they replace petroleum-derived fuel.

National governments are supporting development of technologies and processes that will enable greater fuel efficiency and result in fewer emissions. In Europe, the Single European Sky (SES) initiative aims to unify a number of air traffic management systems found across European countries. Currently, pilots have to alter flight profiles to comply with the procedures of 29 different national air traffic control centers throughout Europe. SES would reduce this number to 9 control zones, resulting in optimized flight profiles and shorter, more direct routes.

In the United States, the Next Generation Air Transportation System (NextGen) is a program overseen by the Federal Aviation Administration (FAA). It aims to overhaul the air traffic control system from a ground-based radar system to one that is satellite-based. It has several major components including: 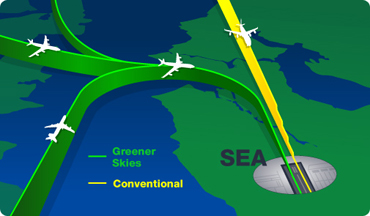 Flight 505 was the first passenger flight in the Greener Skies Over Seattle initiative, a collaborative project between the FAA, airlines and the Port of Seattle. The FAA will add 27 new procedures, expanding the use of optimized profile descents (where the airplane essentially glides in idle to the runway threshold), area navigation (RNAV) arrivals (which are GPS-guided arrivals) and required navigation performance (RNP) approaches (which take RNAV to an additional level of precision).

The Continuous Lower Energy, Emissions and Noise (CLEEN) program is a part of NextGen that focuses on bringing technologies to market that reduces aircraft fuel use, emissions and noise. The goal is to achieve reductions of 32 dB in noise levels, 60% in takeoff and landing NOx emissions and 33% in fuel burn. The FAA has partnered with five companies in a cost-sharing program. The FAA plans to invest $125 million over five years, a sum that could be doubled by investments from corporations.

Boeing is investigating two technologies under CLEEN: adaptive trailing-edge (ATE) configurations and a ceramic matrix composite (CMC) acoustic nozzle. The ATE concept aims to provide control over wing performance during all stages of flight. It involves adding a wedge to the wing flaps to influence pressure loads and cut drag.

The CMC concept makes use of a ceramic matrix composite material designed to make jet engines quieter, lighter and more efficient. The composite can withstand higher temperatures than titanium or superalloys in use today, tolerating the hot exhaust gases that high efficiency engines produce.

"In the past five years, finding new applications and innovative designs based on these types of materials has gone from labs to flight-ready," says Frank Doerner, vice president of Materials, Processes and Structures Technologies for Boeing Research and Technology. Boeing has flight-tested these two concepts through its ecoDemonstrator Program on a 737-800 and 787, respectively. 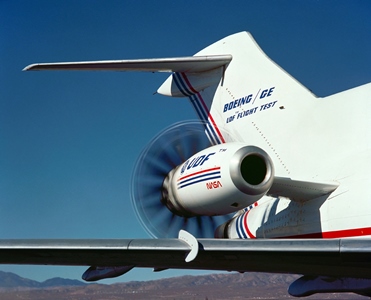 The open rotor concept exposes the propulsive fins of the jet engine fan to the open air as opposed to the standard location covered by a cowling in a ducted fan engine. The open rotor fan has the potential to increase fuel efficiency.

Another company taking part in the CLEEN program, is Honeywell, whom are working to improve engine efficiency through seven technologies including impeller materials resistant to higher temperatures, advanced thermal barrier coatings and low-leakage air seals. The company is also testing alternative jet fuels.

"To evaluate the use of aviation biofuels in aircraft engines, we will be working with Honeywell’s UOP business unit, which develops refining process technologies. UOP has developed technology to convert sources like algae and camelina into jet fuel, says Ron Rich, vice president of Propulsion Systems, Honeywell Aerospace.

Pratt & Whitney (P&W) is developing a geared turbofan engine with an ultra-high bypass ratio as part of the CLEEN initiative. "Unlike conventional turbofans based on existing technology that have been stretched to its limits to achieve added efficiencies, the geared turbofan engine technology has runway and should achieve fuel burn savings of 25-35% by the 2020s,” says Alan Epstein, Pratt & Whitney vice president, Technology & Environment.

One other firm in the CLEEN program, is Rolls-Royce,whom are investigating innovative materials for turbine airfoils. Ceramic matrix composite blade tracks offer what could be a 50% reduction in cooling and component weight compared to a design using standard metallic material. Dual-wall airfoils in the turbine provide a 20% reduction in cooling and increased operating temperature capability.

Looking to the future, changing the fundamental mechanism of propulsion could have a profound effect on fuel efficiency. Researchers at the Massachusetts Institute of Technology’s (MIT) Laboratory for Aviation and the Environment are looking into the electrohydrodynamic effect as a source of thrust. The "ionic wind" this effect produces occurs when a current passes between two electrodes to create an electric field. The field gradient removes electrons from nearby air molecules, creating charged particles that are attracted to one electrode and repelled by the other. These particles collide with surrounding neutral molecules, imparting their momentum and generating thrust.

Efficiencies that come via an electrohydrodynamic thruster could be substantial. Ionic thrusters produce 110 newtons of thrust per kilowatt. That compares to 2 newtons per kilowatt for a traditional jet engine.

Barriers exist to bringing this technology to practical applications. One challenge is low thrust density; a large air gap is necessary to produce a sufficiently strong thrust. Another is the magnitude of voltage required to produce a useful amount of thrust, possibly hundreds or thousands of kilovolts to lift a small aircraft.

"Efficiency is probably the number one thing overall that drives aircraft design," says Steven Barrett, assistant professor of aeronautics and astronautics at MIT. Ionic thrusters are viable insofar as they are efficient. He says that unanswered questions remain, but "because they seem so efficient, it’s definitely worth investigating further." 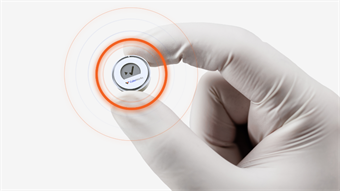