A new study says that more than 1 in 5 active U.S. underground natural gas storage (UGS) wells could be at risk of leaks due to obsolete well designs.

The study, from the Harvard T.H. Chan School of Public Health, says that the obsolete wells operate in 19 states across 160 UGS facilities that encompass more than half of the total working gas capacity in the U.S. The oldest wells are in Ohio, Pennsylvania, New York, and West Virginia. 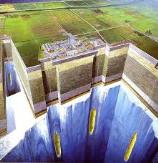 Artist's rendering of underground storage. Credit: EIAThe research team says the potentially vulnerable wells are likely to be similar in design to the well that failed and led to the nearly four-month-long Aliso Canyon gas leak in California in 2015/16. That accident is regarded as one of the largest single releases of greenhouse gases in U.S. history.

The research team identified 2,715 active UGS wells across the U.S. that, like the failed well at Aliso Canyon, were not originally designed for gas storage.

The 99% of repurposed wells constructed prior to 1979 are "likely to exhibit certain design deficiencies" including single passive barrier protection. An estimated 210 active repurposed wells were built before 1917, meaning they were built before cement zonal isolation methods were first used. "These wells...represent the highest priority related to potential design deficiencies that could lead to containment loss."

The paper was published in Environmental Research Letters.

Between October 2015 and February 2016, nearly 100,000 metric tons of methane were released into the atmosphere from a failed storage well operating at the Aliso Canyon UGS facility near Porter Ranch, Calif. The 118-day leak resulted in the evacuation of nearly 6,000 households and put at risk natural gas supplies for much of southern California, including refineries and 10,000 megawatts of electric power generating capacity.