Since its installation in 1991, the Vindeby Offshore Wind Farm produced 243 GWh of power and covered the annual power consumption of around 2,200 households in Denmark. After 25 years of service, this world’s first offshore wind farm is to be decommissioned by owner/operator DONG Energy. 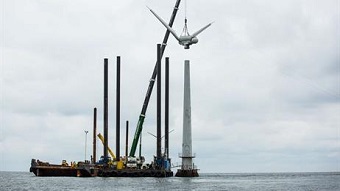 The Vindeby system has played a major role in scaling up and advancing offshore wind. A single one of the largest turbines available today at utiity-scale offshore wind farms generates more power than the entire Vindeby Offshore Wind Farm.

The 11 wind turbines at Vindeby, located 1.5-3 km offshore, were lifted into place in one piece during the 1991 installation. Now the blades, nacelle and tower will be dismantled and taken down individually by a mobile crane on board a jack-up vessel. The concrete foundations will be broken down on site, mainly by hydraulic demolition shears, and collected afterward.

All wind turbine components will be sent onshore to Nyborg Harbour and reused as much as possible as spare parts for other wind turbines. Some of the blades will become part of a research project at DTU Risø while others will be reused in an innovative noise barrier concept. One wind turbine will also become part of the exhibition at 'Energimuseet' (the Danish Museum of Energy). Components not immediately reusable will be transported to a certified recovery company.

The turbines for Vindeby Offshore Wind Farm were supplied by Bonus Energi, now Siemens Wind Power, and the foundations were produced by MT Højgaard.