Offshore wind may be more powerful, yet more turbulent, in the northeastern United States than in the Baltic Sea and the North Sea, University of Delaware (UD) researchers say. The findings could have implications for offshore wind farm design in the U.S., including the assessment of how much wind power can be produced, what type of turbines should be used, how many turbines should be installed, and the spacing between each.

“Our study found that wind conditions at Cape Wind [off the coast of Martha’s Vineyard, Massachusetts] are unstable between 40% and 80% of the time, depending on season and time of day,” says lead researcher Cristina Archer, associate professor in the university's College of Earth, Ocean and Environment. Data from European offshore wind farms shows atmospheric conditions are predominantly neutral—meaning neither too windy nor too still—with unstable wind conditions occurring 20% of the time. 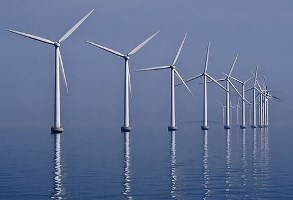 Data from European offshore wind farms show unstable wind conditions occurring only 20% of the time. Image credit: University of Delaware. No measurements exist of wind and turbulence around an offshore wind turbine’s rotor blades in the ocean in the U.S. because none have been built. (The first U.S. offshore wind farm is currently under construction at Block Island, off the coast of Rhode Island.) Instead, data was estimated based on either numerical simulations or using available buoy data to infer what the conditions would be at the height of the wind turbine’s rotor blades.

However, wind data collected at the Cape Wind Scientific Data Tower in 2003-09, via sensors positioned approximately 65 feet, 131 feet and 196 feet high, showed that the region’s atmospheric conditions are generally unstable. In 2013 and 2014, the Delaware research team opened research in an effort to validate the Cape Wind tower findings with their own measurements.

The researchers flew a plane above and around the Cape Wind tower 19 times over two summers and measured wind, temperature, and humidity during various weather conditions. They also installed new wind and wave sensors on the Cape Wind platform.

“We get the same message whether we look at the turbulence from the flights or from the sonic anemometers on the tower, or whether we consider the wind speed data alone. The marine atmosphere is more likely to be unstable than neutral,” Archer says.

According to Archer, the advantage of these turbulent conditions is that, at the level of the turbines, “bumps” bring wind down from the upper atmosphere, where it is typically windier. This means extra wind power, but that extra power may come at a cost that includes more stress on the turbines' blades.

Archer says the findings could have implications for how other offshore wind farms in the region should be designed. Increased turbulence could potentially impact turbine selection and spacing. However, wind turbine manufacturing standards are based on the assumption of neutral stability, she says.

According to the researchers, further study is needed to determine whether the phenomenon is localized to Cape Cod, since offshore wind installations on the East Coast are planned for Maryland, New Jersey and Massachusetts.

By posting a comment you confirm that you have read and accept our Posting Rules and Terms of Use.
Advertisement
RELATED ARTICLES
Cape Wind Calls It Quits
GE to Invest $400 million in 12 MW Offshore Wind Turbine
Retirement for First Offshore Wind Farm
Wind farm optimization is a breeze with new modeling tool
Iberdrola Unit Eyes 800 MW of Wind in Rough Waters
Advertisement