Their goal is to come up with an improvement on deep-cycle lead batteries or lithium ion, which wear out relatively quickly and are hazardous to dispose of. 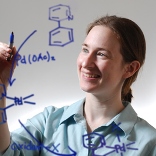 University of Michigan chemistry professor Melanie Sanford.The researchers are focusing on redox flow batteries. These use a central set of inert electrodes connected to two tanks holding molecules called anolytes and catholytes that store and release charge. Passing solutions of the molecules over the electrodes in one direction charges the battery, while passing them the other way releases the charge.

Typical redox flow batteries contain molecules based on vanadium, which is a toxic heavy metal. A problem is that the molecules that can store more charge tend to be less stable.

Sanford, along with University of Utah chemists, Matthew Sigman and Shelley Minteer, are working with the U.S. Department of Energy's Joint Center for Energy Storage Research, which is dedicated to creating next-generation battery technology. Sanford's lab developed potential electrolyte molecules aided by Minteer. Sigman used a computational method that uses the structural features of the molecule to predict its properties.

They found a compound, but it decomposed when two molecules came in contact with each other. However, these molecules "can't decompose if they can't come together," says Sanford. "You can tune the molecules to prevent them from coming together and annihilating each other."

The most promising anolyte is based on the organic molecule pyridinum, which contains no metals and has enhanced stability. Although other compounds exhibited longer half-lives this one provides the best combination of stability and amount of stored energy. The next step is to identify a catholyte to pair with it.

By posting a comment you confirm that you have read and accept our Posting Rules and Terms of Use.
Advertisement
RELATED ARTICLES
Chemical Stability Gains for Non-Aqueous Redox Flow Batteries
An improved organic redox flow battery
A Battery Breakthrough of Biblical Proportions
Long-lasting Flow Battery Technology
Fluorescent Dye Can Stockpile Energy
Advertisement