In studying the sources of black carbon (BC) in Arctic regions, a team of international researchers discovered that 35% of BC in the Russian Arctic originates from residential heating sources and 38% comes from transport. Open fires, power plants, and gas flaring contribute only 12%, 9%, and 6% respectively.

These estimates are in accord with previous work for some areas of the European Arctic, but for Siberia, the findings differ from past research which had suggested that gas flaring contributions were much higher. 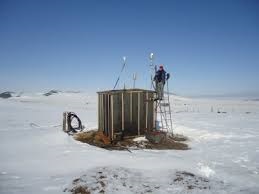 Black carbon was monitored at this research station in Tiksi, Siberia. Source: Stockholm UniversityBC increases snow and ice melt by dulling the reflective surface and increasing the absorption of sunlight. Its presence is one reason that Arctic regions have warmed faster than others, with average temperatures there today over 4°C higher than the 1968-1996 average, according to the U.S. National Oceanic and Atmospheric Association.

BC may also be contributing to the steep decline in summer Arctic sea ice coverage in recent decades, and the researchers contend that reducing such pollution might hold some potential for climate change mitigation. Emissions from sources closer to the Arctic lead to greater warming (per unit of emitted black carbon) compared to more distant sources.

Participating in the research were scientists from Stockholm University (Sweden), Norwegian Institute for Air Research, University of Alaska Fairbanks, the Russian Academy of Sciences, and the International Institute for Applied Systems Analysis (Austria).

By posting a comment you confirm that you have read and accept our Posting Rules and Terms of Use.
Advertisement
RELATED ARTICLES
Polar forecast: Hotter times in the Arctic
Finding sources of black carbon in the Arctic
Study: Permafrost temperatures are heating up
Video: 2020 ties with 2016 for warmest year recorded
Shipping company says it won't use Arctic route as ice recedes
Advertisement