In addition to being infamous as the year of the COVID-19 pandemic, history will also record 2020 as one of the hottest experienced, according to data analyzed by NASA’s Goddard Institute for Space Studies (GISS).

The year's globally averaged temperature was 1.84° F warmer than the baseline 1951 to 1980 mean, tying 2020 with 2016 for the warmest on record. Earth's average temperature has risen more than 2° F since the late 19th century, resulting in loss of sea ice and ice sheet mass, sea level rise, longer and more intense heat waves, and shifts in plant and animal habitats.

Causative agents include the Australian bush fires during the first half of the year, which burned 46 million acres of land, releasing smoke and other particles more than 18 miles high in the atmosphere, blocking sunlight and likely cooling the atmosphere slightly. In contrast, global shutdowns related to the COVID-19 pandemic reduced particulate air pollution in many regions, allowing more sunlight to reach the surface and producing a small but potentially significant warming effect. Despite overall reductions in the amount of carbon dioxide emissions due to the shutdowns, overall CO2 concentrations continued to increase. As warming is linked to cumulative emissions, the overall amount of avoided warming will be minimal. Warming trends are most pronounced in the Arctic, a region warming more than three times as fast as the rest of the globe over the past 30 years. 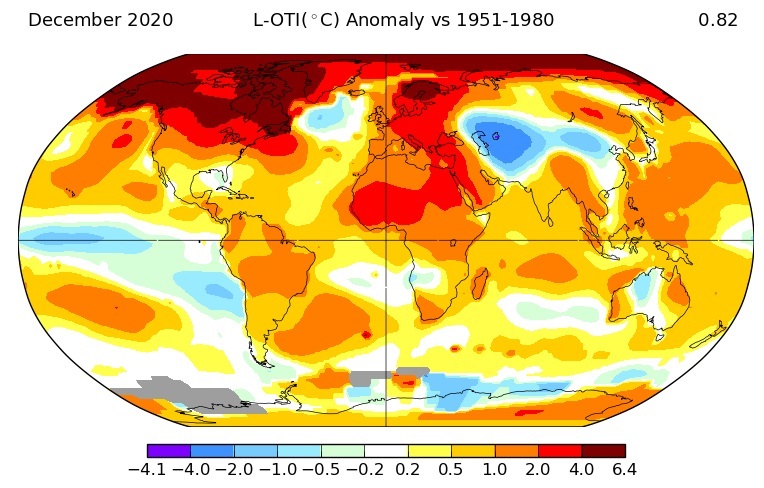 By posting a comment you confirm that you have read and accept our Posting Rules and Terms of Use.
Advertisement
RELATED ARTICLES
Video: 2018 was the fourth hottest year on record, NASA reports
2016 Ranks as Warmest Year since 1880
NOAA: July 2019 was the warmest month ever
Video: New records set for climate change indicators in 2021
Fighting Global Warming with Global Cooling
Advertisement