Study: Permafrost temperatures are heating up 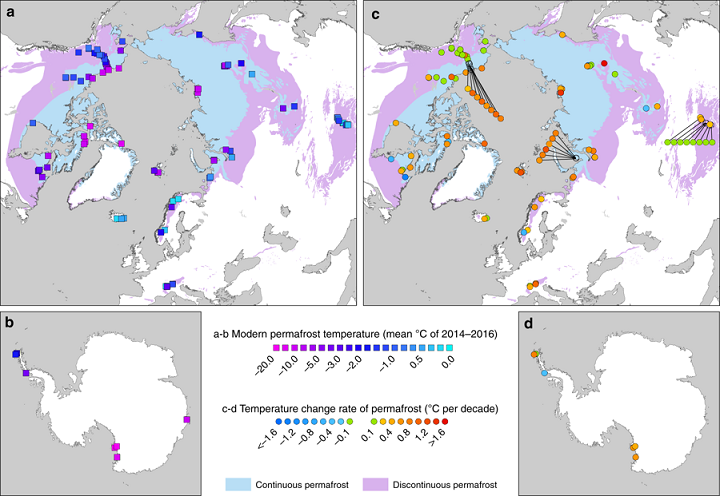 Permafrost temperature and rate of change near the depth of zero annual amplitude. a, b) Mean annual ground temperatures for 2014–2016 in the Northern Hemisphere and Antarctica, n = 129 boreholes. c, d) Decadal change rate of permafrost temperature from 2007 to 2016, n = 123 boreholes. Changes within the average measurement accuracy of ~±0.1 °C are coded in green. Continuous permafrost zone (>90% coverage); discontinuous permafrost zones (<90% coverage). Source: CC BY-SA 3.0

Permafrost, the ground which remains below the freezing point of water for two or more years, is estimated to cover one-sixth of Earth’s land area and in some cases reaches a depth of 1.6 km. The survival of this component of the cryosphere is now called into question, as an analysis of more than 120 drillings provides evidence of permafrost warming.

Data obtained by the Global Terrestrial Network for Permafrost, an international initiative promoting homogenization of data collection on permafrost monitoring, show that from 2007 to 2016 soil temperatures of continuous permafrost sampled at depths greater than 10 m increased by 0.39° ± 0.15° C, while discontinuous permafrost warmed by 0.20° ± 0.10° C.

Warming was also evident in permafrost regions of high mountain ranges and in the Antarctic. The temperature of the permanently frozen soils in the Alps, in the Himalayas and in the mountain ranges of Nordic countries climbed by an average of 0.19° C. An increase of 0.37° C was documented in Antarctic boreholes.

Permafrost melting releases carbon dioxide and methane and accelerates global warming. The phenomenon also places roads, buildings and other structures built in these zones at risk.

By posting a comment you confirm that you have read and accept our Posting Rules and Terms of Use.
Advertisement
RELATED ARTICLES
Arctic thaw remobilizes sequestered mercury
Warming Trend Prompts Action at 'Doomsday' Vault
Discovery of a Mechanism That Worsens Climate Change
Dark Fiber Used as a Seismic Monitoring Tool
Researchers revisit methane hydrates and like what they found
Advertisement