Four paralyzed patients suffering from amyotrophic lateral sclerosis and complete locked-in syndrome -- incapable of even moving their eyes to communicate – successfully used a brain-computer interface to convey their thoughts. 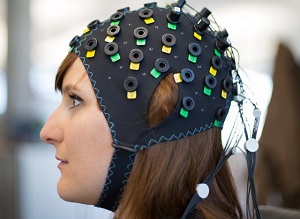 The questions elicited correct responses seven times out of ten, demonstrating the ability to communicate using thoughts alone. In one case, a family requested that the researchers ask the patient whether he would agree for his daughter to marry her boyfriend. The answer was no, nine times out of ten.

What seemed to surprise the researchers the most? The question, “are you happy?” resulted in a consistent “yes” response from the four people, repeated over weeks of questioning.

While other BCIs have previously enabled some paralyzed patients to communicate, NIRS is, to date, the only successful approach to restore communication to patients suffering from completely locked-in syndrome, according to the researchers.

By posting a comment you confirm that you have read and accept our Posting Rules and Terms of Use.
Advertisement
RELATED ARTICLES
Giving Voice to Immobilized Patients through Brain-Computer Interface
Paralyzed volunteer can 'write' again thanks to mind-reading AI
Exoskeleton trial returns limb movement for quadriplegics
Inroads in biomedical engineering
3D-printed assisted suicide pod receives approval for use in Switzerland
Advertisement