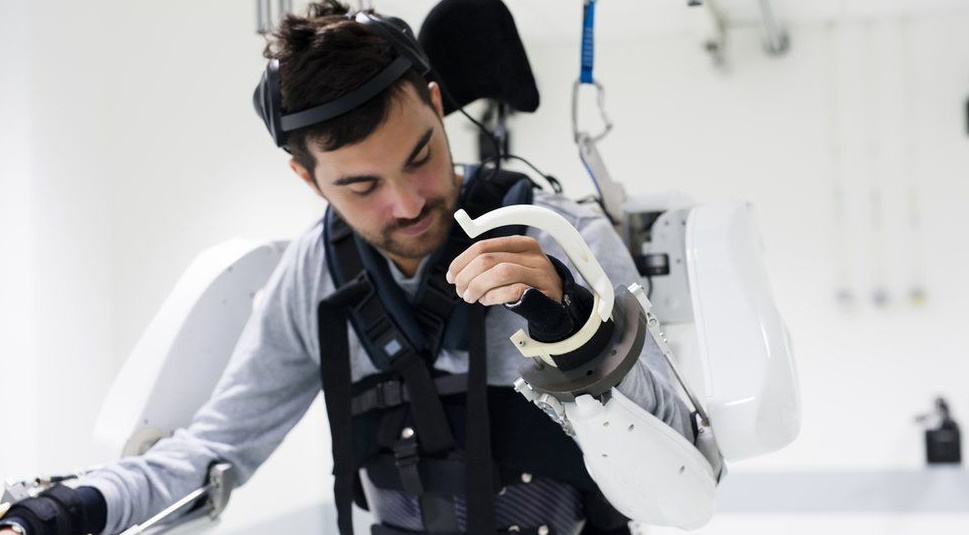 Source: ClinatecA team of researchers developed a four-limb robotic exoskeleton that operates via brain signals to restore limb function to those suffering from quadriplegia.

The system might return autonomy to individuals with quadriplegia — the partial or total loss of the use of all four limbs due to illness or injury, otherwise known as tetraplegia — using a partly invasive wireless system to communicate signals from the brain to an algorithm that turns those signals into exoskeleton movements.

For two years, the research team has been developing the system with help from a 28-year-old unnamed quadriplegia patient, paralyzed from the shoulders down following a spinal cord injury. Two recording devices were implanted, one on each side of the patient's head between the skin and the brain, spanning the sensorimotor cortex region of the brain, which is responsible for controlling motor function and sensation.

Within the recording devices are grids of electrodes that extract signals from the brain and send those signals to the algorithm, which are in turn sent to the exoskeleton to carry them out. The exoskeleton, with 14 joints and 14 degrees of freedom, is ceiling-mounted for balance as the wearer moves.

The team taught the algorithm to grasp the patient’s thoughts through assorted mental tasks, while simultaneously improving upon the movements the patient could make. The team said that initial trials of the exoskeleton system have been successful, enabling the patient to walk and move all four limbs.

However, the research team cautions that the current system is experimental and that it is not ready for clinical application. Following significant improvements, the team believes that the exoskeleton system may eventually improve the quality of life and the autonomy of those with quadriplegia.

The research, conducted by researchers from The University of Grenoble and Centre Hospitalier Universitaire de Grenoble, among others, appears in the journal Neurology.

By posting a comment you confirm that you have read and accept our Posting Rules and Terms of Use.
Re: Exoskeleton trial returns limb movement for quadriplegics
#1

The control is fantastic, a lot of miniaturization of the power assist unit is needed. But love it.