The critical import of biomedical engineering — the application of engineering principles to the healthcare and medical industries — cannot be underscored enough with the seemingly countless life-saving innovations that are introduced on an almost daily basis.

A whirlwind of innovations, from diagnostic devices, artificial organs, robots, prosthetics and pharmaceuticals, have seemingly emerged in lockstep with advancements in related fields, including biomaterials, for example.

What follows is a rundown of some of Engineering360’s coverage of the innovations being devised by those in the biomedical engineering field. 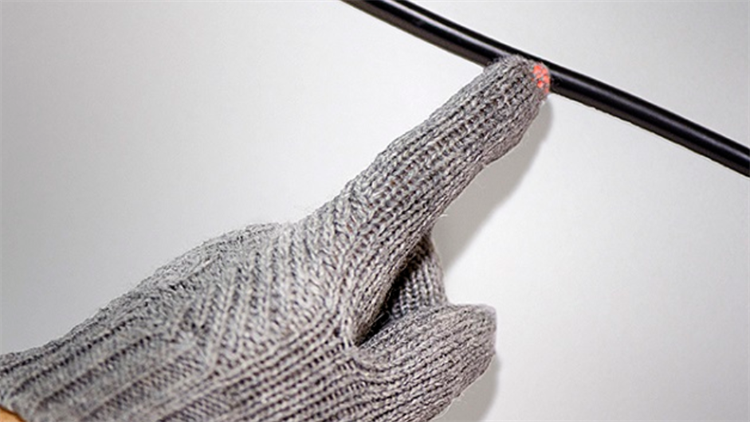 The fingertips of a wireless voltage detection glove illuminate when the wearer’s hand approaches a live cable. Source: Purdue University

A team from Purdue's School of Industrial Engineering and the Weldon School of Biomedical Engineering in Purdue's College of Engineering has developed smart clothing — garments that can be used to monitor the wearer’s health and can communicate with other devices — that is capable of withstanding the hazards encountered with washing machines.

To accomplish this, the Purdue team devised a new spray/sewing method for transforming clothing into battery-free wearables.

"By spray-coating smart clothes with highly hydrophobic molecules, we are able to render them repellent to water, oil and mud," said Ramses Martinez, an assistant professor in Purdue. "These smart clothes are almost impossible to stain and can be used underwater and washed in conventional washing machines without damaging the electronic components sewn on their surface."

A biomedical research team in the Akay Lab at the University of Houston has devised a chip that significantly expedites the time it takes to identify drug combinations with the most promise for destroying brain tumor cells.

The new chip reportedly enables multiple-simultaneous drug administration and parallel testing of drug response for patients with glioblastoma (GBM) — an aggressive form of cancer that tends to form in the brain.

To demonstrate the chip’s capabilities, the researchers cultured a piece of tumor biopsy and placed it in the chip. The addition of chemotherapy drugs to the chip’s microvalves reportedly enabled the researchers to determine within two weeks the drug combination, and its specific proportion, that showed the most promise for killing the greatest number of tumor cells.

A team of biomedical engineers at the Cleveland Functional Electrical Stimulation (FES) Center at the Louis Stokes Cleveland VA Medical Center, has developed a computer model that can handwrite the thoughts of a paralyzed volunteer who is no longer capable of putting pen to paper.

Building upon related research where paralyzed volunteers have been implanted with electrodes for the purpose of enabling those patients to move a cursor to select letters on a display, researchers used the implanted electrodes to write the alphabet according to the thoughts and imagined motions of the paralyzed patient. Using a brain-computer interface, the volunteer was asked to imagine the motions involved with writing the letters of the alphabet. The associated brain activity trained the neural network, which is a series of algorithms that recognizes patterns, to decipher the commands and trace the imagined motions of the hand.

The robot was developed in response to the COVID-19 pandemic for use in schools and office settings to expedite a return to a pre-COVID-19 world.

The robot features LEDs designed to eliminate COVID-19 on surfaces in addition to other bacteria, such as strains of the flu, and it joins a host of other surface solutions to emerge following the COVID-19 pandemic.

Biomedical engineers from Penn State College of Engineering have been working to develop life-saving tech that localizes and images blood clots in deep veins, which can prove to be deadly. 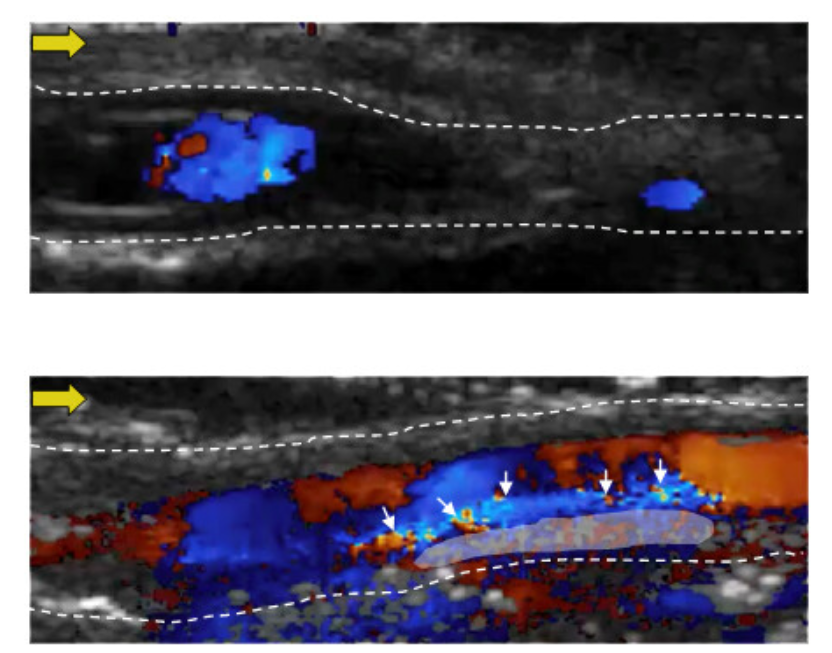 Penn State researchers developed particles that target blood clots and visualize their structures well compared to traditional ultrasound imaging. These images show blood flowing from left to right: The top image does not have the particles, while the bottom one does. Source: Penn State/Scott Medina

To identify the location, composition and size of blood clots, the bioengineers used a particle approach called nanopeptisomes (NPeps). According to the team, the particles form a shell around a droplet of fluorine-based oil, like liquid Teflon. The shell’s surface features a molecule that locates and adheres a protein to the surface of activated platelets, which are the cellular components of clots.

“The particles bind to the surface of the clots, we apply the ultrasound, and the droplet turns to gas and forms a bubble under the shell,” explained the team. “It gives an excellent contrast for imaging. The bubbles appear exactly where the clots are forming.”

By posting a comment you confirm that you have read and accept our Posting Rules and Terms of Use.
Advertisement
RELATED ARTICLES
Paralyzed volunteer can 'write' again thanks to mind-reading AI
Improved cancer chip speeds up drug testing
Surface Coating Repels All Bacteria, Viruses and Other Liquids
Microchip Improves Circulating Tumor Cell Diagnostics
"Bionic" Chip Will Aid Study of Neurological Diseases
Advertisement