Taking "chemical photographs" of the cartilage between joints and comparing them to engineered versions could lead to better implants, say researchers.

Articular cartilage is the smooth, white tissue that covers the ends of bones where they come together to form joints, allowing the bones to glide over each other with little friction. In the UK, 8.75 million people suffer osteoarthritis, which is associated with damage to their articular cartilage and can lead to a range of treatments, including joint replacements. 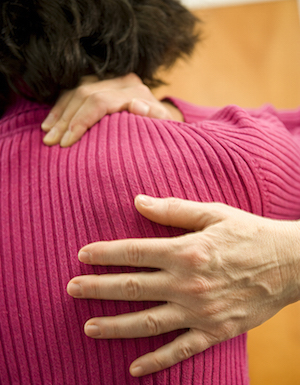 Osteoarthritis, which is associated with damage to the articular cartilage, can lead to a range of treatments. Image credit: ©Bob Stockfield, courtesy of the National Center for Complementary and Integrative Health.In regenerative medicine, scientists are exploring ways of growing cartilage-like material that could replace damaged real cartilage. However, researchers have so far not been able to successfully mimic the complex structure of natural articular cartilage in the lab.

Scientists led by Molly Stevens, professor of biomedical materials and regenerative medicine at Imperial College London, have been growing cartilage-like material using cells seeded onto scaffolds made from a biologically compatible material. Now, they are using Raman spectroscopy, a form of biochemical analysis using the properties of light, to compare how close their engineered cartilage is to the real thing.

Articular cartilage has previously been classified as having three distinct zones but, using Raman spectroscopy, the team was able to image at least six different layers. They mapped the distribution throughout the layers of the three main components in human cartilage—water, a group of sugars called glycosaminoglycan and collagen—and were also able to image how the collagen fibers were oriented, which is important for understanding cartilage’s mechanical properties.

Using Raman spectroscopy, the researchers were also able to determine at very high resolutions the chemical composition of each engineered sample. They looked at important indicators during the growth of the engineered cartilage samples, such as the amounts of collagen and water compared to the real samples, which indicate how closely they approximate actual cartilage.

The next step will see the team utilizing Raman spectroscopy to systematically evaluate the conditions in the lab that can influence the growth of articular cartilage. They hope that this will allow them to identify the settings that improve conditions for engineering tissue so that it conforms more accurately to the structure of natural cartilage.

By posting a comment you confirm that you have read and accept our Posting Rules and Terms of Use.
Advertisement
RELATED ARTICLES
New Bi-Functional Composite Could be New Treatment for Osteoarthritis
Bio-glass Could Help Regrow Human Cartilage
Strides in Regenerative Medicine: Bone Engineering
Regenerating Bones, Tissues with Apple Waste
Watch: 3D printing customizes cartilage for skin cancer repair
Advertisement