Hitachi has developed what it describes as a highly accurate finger vein authentication technology using the camera commonly integrated in the standard smartphone, designed to enable biometric authentication using finger vein patterns as a personal identification method for smartphone transactions such as online shopping.

With the increasing use of smartphones for online shopping and management of private data, smartphone transactions have increasingly become the target of crime. Conventional smartphone personal identification methods such as passwords and fingerprints, however, continue to carry the risk of compromise and spoofing. 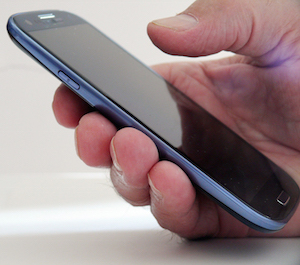 Hitachi's technology identifies each finger from a color image of the user's hand captured by a camera, from which the vein pattern information is extracted. Image credit: Pixabay.According to Hitachi, the advantage of finger vein authentication is that the characteristics used for biometric identification are in vivo, making it more difficult to forge or spoof compared to other biometric methods such as fingerprint, facial recognition or voiceprint. Until now, however, a dedicated image sensor using infrared light was necessary to capture finger vein patterns that are largely invisible to the human eye.

Rather than using an image sensor, Hitachi's technology identifies each finger from a color image of the user's hand captured by a camera, from which the vein pattern information is extracted. The company says this technique allows such information to be reliably distinguished from skin surface creases, which can easily change over time.

Hitachi says its technology accurately compensates for positioning and inclination of the fingers by using actual images to identify the shape and color of fingers—so that only information from the finger area is extracted from the camera image. This raises the degree of freedom in finger position and angle. Moreover, incorporating the ability to authenticate several different fingers at the same time increases the accuracy and security levels.

Hitachi says in the future it plans to combine this technology with additional security solutions, such as encryption, to further strengthen the security of biometric authentication methods.

By posting a comment you confirm that you have read and accept our Posting Rules and Terms of Use.
Advertisement
RELATED ARTICLES
Study: Vein-based 3D biometric authentication nearly fool-proof
Using Fingerprints to Access Smartphones May Soon Be Replaced By Scanning User's Veins
AI Creates Synthetic Fingerprints
Haptics Research Could Lead to Advanced Touchscreens
Biometric Security: Your Body as Your Password
Advertisement