As NASA aeronautics engineers prepare to develop greener, quieter, faster X-planes, they are already testing concepts that could be candidates.

One of those is a blended wing body (BWB)—a 6% scale model of which is being tested for six weeks in the 14-by-22-foot Subsonic Tunnel at NASA's Langley Research Center, in Hampton, Virginia.

"We're happy to have the model back in our wind tunnel," says Dan Vicroy, principal investigator at NASA Langley. "It gives us a couple of opportunities—to add to our knowledge about this configuration as well as how to improve our testing methods."

A blended wing body doesn't look like a conventional airplane. Instead of the usual tube-and-wing design, it is shaped more like a triangle where the wings are—in essence, merging them into the body. Another difference is that it does not have a tail. 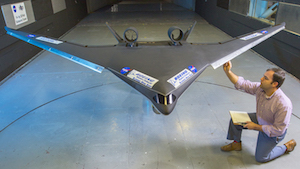 Boeing engineer Stephen Provost checks out a blended wing body model before a wind tunnel test run at NASA Langley. Image credit: NASA/David C. Bowman.This same model was put through its paces in the Langley Subsonic Tunnel in 2014 and in the 40-by-80-foot wind tunnel at NASA's Ames Research Center in 2015. That work was part of NASA’s Environmentally Responsible Aviation program, which developed technologies to improve fuel efficiencies, lower noise levels and reduce emissions.

But for this test it looks a little different. The top of it has been painted in non-reflective matte black to accommodate laser lights that will sweep across the model in sheets. NASA and Boeing researchers will use those laser sheets, combined with smoke, in a technique known as particle imagery velocimetry (PIV) that will map the airflow over the model.

"We didn't get the opportunity to use PIV in the previous tests," says Vicroy. "It helps us analyze the flow going into the engine inlets, which is one of the challenges with this design since the engines are on top of the fuselage, toward the rear."

In most planes flying today, the engines are out on the wings, in front, where there is clean airflow. Anything in front of an engine can disrupt the flow.

"Airflow makes a difference in how well the engine performs," says Vicroy. "It's a matter of how much distortion the engine is seeing. So if you want the engines to perform well, you want to have the distortion at a minimum."

So if engineers have to worry about airflow—why change where the engines are? Researchers say putting them on top of the plane helps shield noise, especially from people on the ground.

For Boeing, the tests are part of an ongoing research development program.

With the exception of Boeing's proprietary technology, NASA knowledge gained from this collaborative research will be documented and publicly available to benefit the aviation indus

By posting a comment you confirm that you have read and accept our Posting Rules and Terms of Use.
Advertisement
RELATED ARTICLES
NASA, Boeing Test Aircraft Wing Coatings to Improve Fuel Efficiency
NASA to Test In-Flight Folding Wing Design
Ground-Effect Cargo Craft Under Development
NASA Aviation Technologies Could Save Airlines $250b
Shape Changing Aircraft Wings
Advertisement