The impact of greenhouse gas accumulations on sea level rise has been masked by the 1991 eruption of Mount Pinatubo in the Philippines, according to a study led by the U.S. National Center for Atmospheric Research (NCAR).

Satellite observations of sea level rise, which began in 1993, indicate that the rate has held fairly steady at about 3 millimeters per year, NCAR says. But the expected acceleration due to climate change is likely hidden in the satellite record because the record began soon after the Pinatubo eruption, which temporarily cooled the planet and caused sea levels to drop. 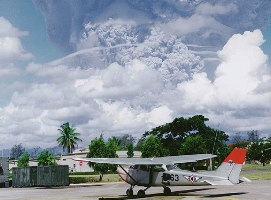 "When we used climate model runs designed to remove the effect of the Pinatubo eruption, we saw the rate of sea level rise accelerating in our simulations," says NCAR scientist John Fasullo, who led the study. "Now that the impacts of Pinatubo have faded, this acceleration should become evident in the satellite measurements in the coming decade, barring another major volcanic eruption."

Climate change triggers sea level rise in a couple of ways, NCAR says: by warming the ocean, which causes the water to expand, and by melting glaciers and ice sheets, which drain into the ocean and increase its volume. In recent decades, the pace of warming and melting has accelerated, and scientists have expected to see a corresponding increase in the rate of sea level rise. But analysis of the relatively short satellite record has not borne that out.

To investigate, Fasullo and colleagues worked to pin down how quickly sea levels were rising in the decades before the satellite record began. To do that, they used a dataset produced by running the Community Earth System Model 40 times on NCAR's Yellowstone supercomputer with slightly different—but historically plausible—starting conditions. The resulting simulations characterize the range of natural variability in the factors that affect sea levels.

A separate set of model runs that omitted volcanic aerosols—particles thrown into the atmosphere by an eruption—was also assessed. By comparing the two sets of runs, the scientists were able to pick out a signal (in this case, the impact of Mount Pinatubo's eruption) from the noise (natural variations in ocean temperature and other factors that affect sea level).

"You can't do it with one or two model runs—or even three or four," Fasullo says. "There's just too much accompanying climate noise to understand precisely what the effect of Pinatubo was."

Analyzing the simulations, the research team found that Pinatubo's eruption caused the oceans to cool and sea levels to drop by about 6 millimeters immediately before satellite observations began being recorded in late 1992. As the sunlight-blocking aerosols from Mount Pinatubo dissipated in the simulations, sea levels began to rebound slowly to pre-eruption levels. This rebound swamped the acceleration caused by the warming climate and made the rate of sea level rise higher in the mid- to late 1990s than it would otherwise have been.

Understanding whether the rate of sea level rise is remaining constant or accelerating is significant because it potentially changes scientists' view of what sea levels might look like in 20, 50 and 100 years, NCAR says. In particular, it could help inform decision makers' views as to whether coastal communities should make plans based on the steady rate of sea level rise measured in recent decades or on the accelerated rate expected by climate scientists.

By posting a comment you confirm that you have read and accept our Posting Rules and Terms of Use.
Advertisement
RELATED ARTICLES
Next Century Will Bring Deep Water to New York City
"Hot Spots" Likely to Blame for Atlantic Coast Sea Rise
EPA relaunches climate indicators website
Study: Port engineers need to integrate climate change effects in their designs
Aerosols Can Cool Climate, But Won't Solve Global Warming
Advertisement