An efficiency conversion record has been claimed by Australian National University (ANU) engineers for a steam-generating solar thermal dish. A 97% conversion rate, which they say bests the previous world record of 93.6% conversion efficiency, was achieved with a receiver deployed on a specially designed solar concentrator dish. 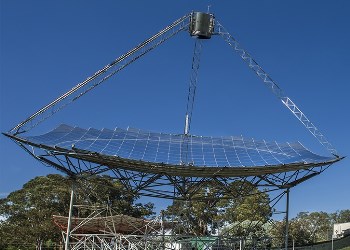 The ANU solar thermal dish. Image source: Stuart Hay, ANUConcentrating solar thermal systems use reflectors to concentrate sunlight and generate steam, which can drive conventional power station turbines. The approach can also be harnessed to store energy when combined with molten salt technologies that allow heat to be stored and released to generate power at night (see video).

At 500 square meters (5,382 square feet), the ANU solar concentrator focuses the power of 2,100 suns onto the receiver, through which water is pumped and heated to 500 degrees C (932 degrees F). The receiver design is a cavity that resembles a top hat with a narrow opening and a wide brim. Water pipes spiral around the underside of the “brim” and up into the “hat.”

The sunlight is focused onto the pipes, heating the water as it enters and spirals up into the cavity. The water reaches peak temperature in the deepest reaches of the cavity, which ANU says minimizes heat loss. Heat that does leak out of the cavity can be absorbed by the cooler water around the hat’s brim.

The receiver design could result in a 10% reduction in the cost of solar thermal electricity, with the goal of lowering the price to $0.12 AUS/kwh ($0.09).

By posting a comment you confirm that you have read and accept our Posting Rules and Terms of Use.
Advertisement
RELATED ARTICLES
Solar Technology Innovation Generates Electricity, Heat and Water
How Does Solar Energy Work? CSP Basics
Desert Sand as an Alternative Thermal Storage Material for CSP
Solar Cell Design Boosts Conversion Efficiency
Video: Sustainable fuel produced from ambient air and sunlight
Advertisement