Engineers at the University of New South Wales say they have achieved a sunlight-to-electricity conversion efficiency of 34.5% using unfocused sunlight.

The cell uses a 28-cm2 four-junction mini-module that has been embedded in a prism. This configuration extracts maximum energy from sunlight by splitting incoming rays into four bands. It also uses a hybrid four-junction receiver to pull more energy from each of the beams of sunlight.

The efficiency result, confirmed by the U.S. National Renewable Energy Laboratory, is greater than the previous record of 24% efficiency: but that earlier device, developed in the U.S., required a larger surface area of 800-cm2. 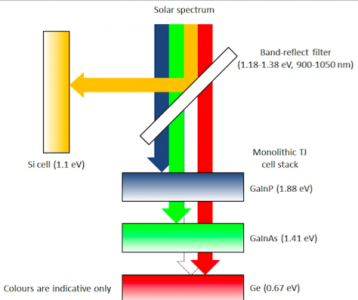 The mini-module the team most recently tested has silicon cell on one face of a glass prism and a triple-junction solar cell on the opposite. The triple-junction cell targets bands of incoming sunlight with a combination of three layers: indium-gallium-phosphide, indium-gallium-arsenide and germanium. As light passes through each layer, energy is extracted at each layer’s junction at its most efficient wavelength, sending the unused part of the light on to the next layer to be harvested.

A portion of the infrared band of light, which is not used by the triple-junction cell, is filtered and bounced on to the silicon cell, which extracts energy from the light that hits the module.

The research team says they believe the spectrum-splitting approach is ideal for solar towers that use mirrors to concentrate sunlight then convert it to electricity.