The allure of clean, low-cost and efficient electric power generated by the sun’s rays until recently has been somewhat elusive as costs and conversion inefficiencies retarded its growth. A technology innovation, however, purports to tackle these technological challenges head on and add more utility.

The system from the Biasca, Switzerland-based company, in conjunction with IBM Research Zurich, is expected to hit the market by 2017. Airlight Energy established a separate company, Dsolar, to market, license and distribute the technology.

The system features three core innovations, according to Gianluca Ambrosetti, head of research at Airlight and responsible for the Dsolar project. The first is a fiber-based concrete used for the structure that can be molded onsite in around four hours and at less expense than steel.

The third, and perhaps the most complex and advanced innovation is the receiver that is made of high-efficiency photovoltaic cells, which have been used for decades in satellites, and the technology for cooling the chips.

The HCPVT system utilizes a 40-m2 parabolic dish. The inside of the dish is covered with 36 elliptic, pneumatic mirrors made of 0.2mm, silver-coated metal foil. 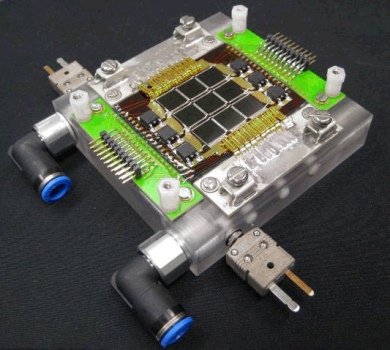 Detail of the Sunflower solar concentrator. Source: DsolarThe dish sits atop the fiber-based concrete structure and is tied to a tracking mechanism that follows the sun and turns the mirrors so they face the sun at the optimum angle. The foil-covered mirrors concentrate the sun’s radiation by reflecting it onto liquid-cooled receivers that feature multi-junction, 1-cm2 photovoltaic chips that individually produce up to 57w on a sunny day. Hundreds of the chips are installed on each Sunflower.

Collectively they can generate 12kW of electrical power and 20kW of thermal power on a sunny day, which is enough to power several homes.

Put another way, the HCPVT can concentrate the amount of solar equal to 2,000 Earth suns and convert 80% into useful energy, of which 30% is electrical energy and 50% is heat energy, according to Dr. Bruno Michel, manager, advanced thermal packaging at IBM Research.

Concentrator technologies only capture the radiation coming from the solar disk and a small area around it, which is called Direct Normal Irradiance (DNI), the amount of solar radiation from the direction of the sun. Concentrator systems do not capture the diffuse part; the rays that deflect off clouds, for example.

However, Ambrosetti says, “as they (concentrators) track the sun, the HCPVT captures more than do static, flat-plate type PV systems in high-irradiation areas.”

A common flat panel photovoltaic solar system has a conversion rating of 15-20% while a concentrator module is about 25-29% efficient, says Sarah Kurtz, principal scientist and reliability group manager at the National Renewable Energy Laboratory (NREL), Golden, Colo. Conversion rates in the 40% and greater range has been achieved in laboratory tests.

Essentially, efficiency is related to the cost of the installation. “If you get 1,000 watts per meter squared of sunlight per square meter of modules (solar cells), and it is 20% efficient, it can generate 200 watts,” she says. “If it is 30% efficient, it can get 300 watts out of that same area. The higher the efficiency, the smaller the number of modules that are needed.”

Triple-junction photovoltaic chips are used in the Sunflower to capture more of the sun’s radiation. Each junction is tuned to a specific wavelength band—short, medium, long—and, “theoretically, you would get the highest efficiency if you would have a different material for every color of the rainbow,” Kurtz says.

Because the sun’s rays are concentrated onto the array of photovoltaic chips, that array needs to be cooled to protect it from high temperatures that could exceed 1,000 degrees Celsius, says Ambrosetti. To handle the cooling challenge, Airlight Energy turned to IBM Research, which had developed a liquid-cooled system used to cool large data centers and supercomputers, including one of the fastest supercomputers in the world, the SuperMUC at the Leibniz Supercomputing Center (LRZ) in Munich.

“We converted an air-cooled data center into a liquid cooled data center and then we reused the thermal energy to heat the building,” Michel says. “The overall impact was quite large; the data center's energy cost went down by a factor of three.”

Michel says that researchers looked for other processes that could use this technology, and hit on solar concentrators. “They happen to have almost the same power density of computer chips, which is 200 watts per square centimeter and that is also what we have in a computer,” he says.

The photovoltaic chips are mounted on microstructure layers, each about 100µm. Water is piped via microchannels that run between these layers within microns of the chip. The water absorbs the heat and draws it away at a rate up to 10 times more effectively than passive air-cooling.

According to Ambrosetti, “The temperature difference between water inlet and outlet is around 5-10 degrees C (for example, 90 C in, 95 C out). The hot water coolant maintains the chips at an operating temperature of 105 C.

Rather than heating a building, as is done at the LRZ, the 90 C water is passed through a porous membrane distillation system where it is vaporized and desalinated. Michel says the system provides 30-40 liters of drinkable water. By creating an array of HCPVT systems, enough water could be produced to satisfy a small town.

Air conditioning is another alternative use. An adsorption chiller converts heat into cooling via a thermal cycle that is applied to an absorber made from silica gel, for example. According to IBM, adsorption chillers, with water as working fluid, can replace compression chillers such as those found in typical HVAC systems.

Cost is a fundamental problem of solar technology, NREL’s Kurtz says. Michel agreed, adding, “People have been dreaming about solar providing all the energy we need since back in the 1970s, and it is still more expensive compared to the nuclear and coal industry, but the cost is going down.”
IBM researchers say that high concentration combined with the low cost of design, they can achieve a cost per aperture area below $250 per square meter. This means that the cost of energy could be less than 10 cents per kilowatt-hour.

“We wanted to make the installation cheaper and we did that by increasing the concentration,” Michel says. “The current state-of-the-art system achieves 500 times concentration and as we go to 2,000 times we need four times fewer chips.

“In terms of construction, a traditional system needs expensive steel for the tracker and the frame, and expensive glass for the reflective optics. Our solution was to replace the steel with concrete that is five times cheaper and the reflective surface of glass with metal foil.”

Airlight's efforts to improve efficiency and lower costs are a reflection of a larger effort. Across the industry, costs are falling and installations are rising. IHS Technology projects that technology improvements and lower costs will drive concentrated photovoltaic solar installations to record levels. In a 2013 study, Concentrated PV (CPV) Report—2013, IHS reported that sales could increase 750% from 160 MW in 2013 to 1,362 MW in 2020. The average installed price for high-concentration photovoltaic systems decreased to $2.62 per watt in 2013, down more than 25% from $3.54 per watt in 2012. The decline is being driven by rising volumes and improved system efficiencies.

As costs fall and technology improves, the promise of solar energy will become more of a reality.