An international research team has found that even brief exposures of the eggs of Atlantic haddock to low concentrations of dispersed crude oil can cause deadly deformities in developing fish, and the findings indicate that oil spills at high latitudes could have serious impacts on some of the world’s most important fisheries.

Atlantic haddock are especially vulnerable because dispersed crude oil droplets attach to their eggs as they float in the ocean, the study found. Only 24 hours of exposure to low concentrations of dispersed oil led to striking and distinctive head and facial deformities in haddock. 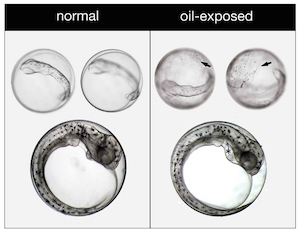 Oil droplets on haddock eggshells; areas with higher concentrations of dispersed oil droplets are indicated by arrows. Image credit: NOAA Fisheries.“The dispersed droplets of crude oil act like a kind of toxic time-release capsule that binds to the eggshells and leads to these extreme abnormalities,” says John Incardona, a research toxicologist at the National Oceanic and Atmospheric Administration’s Northwest Fisheries Science Center. “That creates a unique and newly recognized pathway for crude oil to interfere in the reproduction and survival of these fish.”

Haddock eggshells likely contain a protein that makes them especially “sticky” to oil and its compounds during a 10- to 12-day period of their early development, Incardona says. While oil does not bind to the eggs of other fish species as it does haddock eggs, oil byproducts disrupt the physiological channels that signal muscles in the heart and head of the fish, impairing their function and throwing off their early development, according to the researchers.

The deformities compromise the survival of juvenile fish, which must grow and develop rapidly to stay ahead of predators and contribute to the population. An oil spill in an area where haddock eggs are present during the window of time when they are most vulnerable could lead to lasting impacts on the population and other species that feed on haddock and their eggs, the researchers note.

By posting a comment you confirm that you have read and accept our Posting Rules and Terms of Use.
Advertisement
RELATED ARTICLES
Male Fish Demonstrating Female Characteristics Thanks to Houshold Cleaners, Birth Control Pills
Researchers reveal findings about BP oil spill impact on the Gulf 10 years later
Ultraviolet light could reduce risk of foodborne illness from eggs
7 unexpected ingredients with the potential for solving the plastic waste crisis
Packed eggs to be disinfected with surface treatment tech
Advertisement