NASA’s Mars Rover Exploration program has forced engineers to devise solutions to address new and novel problems. Some of these solutions, as with previous space missions, are now being applied to solve earthbound problems.

For example, many terrestrial machines and machines must operate remotely with infrequent visits from service personnel. This is particularly true when equipment is installed in harsh environments, such as in cold climes or desert regions. Mars Rover technology leads the way in this area. Specific innovations applicable to earthbound issues include flexible circuitry, labyrinth seal technology and robot arms.

The Mars program is ongoing, with the next expedition scheduled for July 2020 when a new machine, about the size of a bus, will be the payload. This next rover will benefit from heritage technology as it aims to pioneer investigations that include the usability and availability of Martian resources (perhaps most importantly, oxygen) to support human missions. 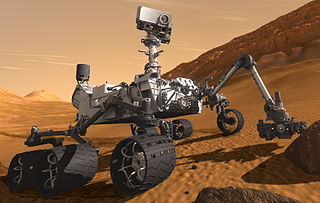 Artist’s concept of the Mars Curiosity rover extending its 2 meter-long arm. Image source: Wikimedia. From the first prototypes, engineers focused on mission-critical systems and the required seamless interactions among them. These systems include propulsion, power, telecommunications, avionics and software. Developing and refining these core systems is the technology base for successfully navigating a craft into the atmosphere of another planet.

Engineering innovation strives to meet the challenges of traveling to and executing tasks on Mars. Specific challenges include entry-descent-landing, autonomous planetary mobility, technology to cope with severe environments, and sample collection and return logistics.

The first successful payload delivered to Mars was the size of a microwave oven and weighed just 23 pounds. Sojourner touched down on Mars on July 4, 1997 following a seven-month journey, and returned the first images of the Martian surface via a color stereo imaging camera.

Although designed for a life of seven Martian solar days (1.03 Earth days), Sojourner exceeded expectations by a factor of 12. It provided chemical and visual data during its unexpected 84-day life. During the mission, scientists and engineers confirmed for the first time the feasibility of developing, designing, launching and operating a planetary mission to Mars all while meeting extreme performance challenges and demands.

Buoyed by the success, NASA increased its Mars exploration projects’ scope and complexity. The twin rovers Spirit and Opportunity landed three weeks apart in January 2004. Bigger and better than Sojourner, each was around the size of a riding lawn mower and weighed about 400 pounds.

It’s Not the Fall, It’s the Landing

NASA and Jet Propulsion Laboratory engineers held their collective breaths as the most ambitious and most expensive ($2.5 billion) Rover mission landed on Aug. 6, 2012. Weighing 384 pounds and presenting the profile of a large auto sedan, the Rover Curiosity began its work after a safe landing. Known by the mission team as the Seven Minutes of Terror, the required standard operating procedure for the landing required executing the following steps:

Curiosity survived this landing, see this link for a video. Equipped with on-board diagnostics, six-wheel “rocker boogie” motion drive systems, a 7.5-foot-long robotic arm and laser cutting tools, Curiosity has made crucial discoveries during its 1,400 days on Mars. Most notable among these may be confirmation that water once flowed on the surface, a finding deduced from sediment deposited in the Gale Crater.

Mars Rover vehicles must be robust, self-sustaining and equipped with the instrumentation and capabilities necessary for mission success from the moment they leave planet Earth. System failures, mechanical breakdowns and power malfunctions are irrecoverable. Mission success or failure solely rests on the base level engineering designs.

For example, engineers used advanced labyrinth seal technology to protect gear boxes from Martian sand and dirt on all Rovers since Sojourner, a technology which has now found widespread use on Earth.

Each labyrinth seal is composed of many grooves, presenting a tortuous path to help prevent dust infiltration, or lubrication leakage around rotating parts. Labyrinth seals on rotating shafts provide non-contact sealing action by controlling the passage of fluid through a variety of chambers by centrifugal motion, as well as by the formation of controlled fluid vortices. At higher speeds, centrifugal motion forces the liquid towards the outside and away from any passages.

Similarly, any liquid escaping the main chamber becomes trapped in a labyrinth chamber, where it is forced into a vortex-like motion. This acts to prevent its escape, and also acts to repel foreign entry. Because these labyrinth seals are non-contact, they do not wear out. Components are made up of hard but lightweight metallic alloys of titanium, copper and aluminum to withstand stress and impacts.

Flexible circuit electronic materials was one of the critical enablers for the low-weight and reliable system design of the Mars Rover drive system, panorama cameras, on-board diagnostics communications, and the robotic exploration arm. This is another example of technologies with widespread applicability on Earth.

The design teams used polyimide-based flexible circuitry to achieve the highest electronic signal performance and mechanical durability. With 70 yards of flexible circuit materials replacing traditional round wires and cable bundles, designers achieved a 70% volume and weight reduction in crucial components. They also gained the toughness of polyimide chemistry necessary to cope with the temperature extremes of the Martian surface.

Mars 2020 will benefit from a heritage of technologies, and will be equipped with next-generation navigation and exploratory capabilities. For example, by using what engineers call a “range trigger,” earthbound pilots will be able to specify where they want the landing parachute to open. And terrain-relative navigation systems will analyze downward-looking images taken during the craft’s descent to map and optimize travel zones for scientific optimization.

By posting a comment you confirm that you have read and accept our Posting Rules and Terms of Use.
Advertisement
RELATED ARTICLES
Video: Touchdown as Perseverance lands on Mars
The Mars Helicopter is packed and prepared for launch
PKB Wins Contract to Support Mars 2020 Mission
Watch a solar eclipse from Mars
Video: NASA releases Mars Opportunity greatest hits after pulling the plug on the rover
Advertisement