"Touchdown confirmed. Perseverance is safely on the surface of Mars," said Swati Mohan, a NASA engineer on the Perseverance team, shortly before 4:00 p.m. Eastern Time on February 18, 2021.

Almost seven months after its July 30, 2020, liftoff from Cape Canaveral, Perseverance landed safely on the red planet after a 300 million mile journey and confirmed its safe arrival with a signal relayed to Earth, received 11 minutes 22 seconds later, via the Mars Reconnaissance Orbiter. The rover hit the Martian atmosphere traveling at almost 12,000 miles per hour, relying on its protective heat shield to help slow it down. At an altitude of about 1 mile, the descent module fired its engines and a new terrain relative navigation system kicked in to identify a safe landing spot. A 70 ft diameter parachute deployed to slow the craft further, bringing its descent to a crawl, after which the hovering-landing sky crane system began its task of lowering the rover inside the Jezero Crater.

The rover and its on-board helicopter will search for signs of ancient microscopic life and collect samples to send back to Earth. It will also demonstrate technologies that can help prepare future missions for both robots and humans.

The next step for Perseverance will be to deploy its high-gain antenna and try to find Earth while making sure it can keep its batteries charged and onboard instruments warm. Once NASA engineers are satisfied that the rover is on stable ground, it will activate its remote sensing mast, and take a series of 360° panoramas. Perseverance will spend at least one Martian year, or two Earth years, collecting samples for eventual return to Earth by a future NASA mission and mapping the fine-scale elemental composition of Martian surface materials. 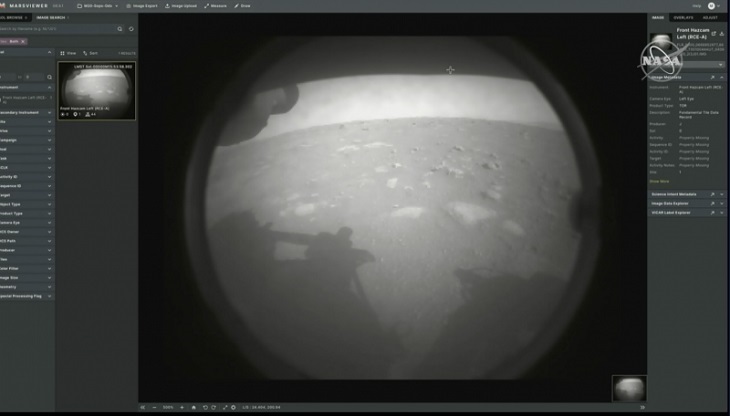 The Perseverance rover took its first image of the Martian surface moments after touching down on February 18, 2021. Source: NASA TV

By posting a comment you confirm that you have read and accept our Posting Rules and Terms of Use.
Advertisement
RELATED ARTICLES
The Mars Helicopter is packed and prepared for launch
NASA launches new rover Perseverance to Mars
NASA preps for first Martian drone helicopter flight
The sensors powering NASA's martian rover
Mars rover successfully grabs rock sample
Advertisement