If electric vehicles are to reach their full potential, consumer concerns over range and reliability in operation and charging must be addressed decisively. Wireless power transfer (WPT) through magnetic induction is seen as a promising approach to resolve this issue. International standards developed by the International Electrotechnical Commission (IEC) are set to play a central role in the rollout of WPT.

Wireless power transfer is seen as an ideal solution to the range and reliability challenge of electric vehicle ownership. Despite the ostensibly attractive environmental advantages of these vehicles, the fear of being stranded far from home is widely perceived as one of the central barriers to the widespread uptake of electric vehicle technology.

(Read this IEEEXplore article on WPT.)

“Electric vehicles are going to be the way we re-invent transportation and reduce the cost in terms of the environment,” says Ned Freeman, a member of the executive committee at Plugless Power (Evatran). “Given that, you start to think about what are some of the things that are holding consumers back when it comes to considering electric vehicles. Number one is range and life.”

Wireless power transfer describes a range of technologies which permit electrical energy to be transmitted to a source of demand without the need for conductive cables or making a physical connection. 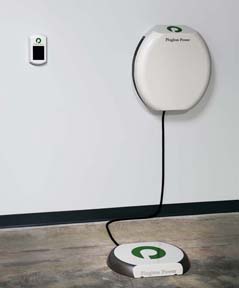 Evatran offers a WPT for electric vehicle owners.Promising approaches include radio, microwave or even laser transmission, coupled capacitance and, perhaps the most market-developed WPT technology to date, magnetic induction.

Similar to the induction charging systems found in the domestic environment on low-power devices such as electric toothbrushes, razors or inductive cookers, in an EV application WPT induces an electrical current in an appropriately tuned coil.

Inductive power transfer is the technology of choice for major auto manufacturers as they look to launch systems commercially. It is also the technology behind one of the world’s first market-ready EV WPT systems from Plugless.

The company began a low-volume roll out of its L2 System – developed and manufactured by Evatran – in mid-2014 after more than two years of trials with partners including Google, U.S. utility Duke Energy and rental car company Hertz. Currently available for the Chevrolet Volt and Nissan Leaf vehicles, a 7,2 kW system for the Tesla S may launch in the next few months.

It uses inductive power transfer from a transmitting coil in a parking pad and charges an EV as quickly as a plug-in Mode 2 (240V) station. Mode 2 charging refers to the connection of an EV to the AC. supply network (mains) not exceeding 32 A and not exceeding 250 V AC single-phase or 480 V AC three-phase utilizing standardized single-phase or three-phase socket-outlets, according to IEC 61851-1:2010, Electric vehicle conductive charging system – Part 1: General requirements.

“If you have an in-ground mount system, that’s what I would say is the candidate which has the most advantages,” says Dr. Jochen Mahlein, who heads the LMS division at SEW-Eurodrive. SEW Eurodriive has experience in WPT for industrial applications for more than 16 years and is a member and secretary of IEC TC 69/JPT 61980.

For example, rather than poles, stanchions or other street furniture, inductive charging systems can be contained within a concrete pad that is flush with the road surface. This makes them difficult to damage, and may offer potentially low maintenance costs. It also helps to solve the issue of the need for an appropriate plug at a charging point. Mahlein says that the installation costs of a WPT system are comparable with those of existing wired alternatives.

For example, there is the possibility of “dynamic” charging while a vehicle is in motion. Such systems are already in use in industrial environments, and in August 2015 the UK’s Highways Agency began off-road trials of dynamic wireless power transfer. The trials will involve replicating motorway conditions and were expected to last for 18 months. 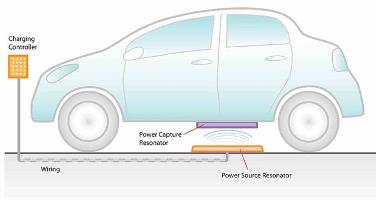 (Click to enlarge.) Basic scheme of a WPT system. Evidence exists of gathering momentum behind WPT technology for the EV market. A 2014 report from Navigant Research concludes that “Most wireless charging systems are in the pilot phase and are likely to remain there for another two to three years. […] Within a decade, wireless charging could be the leading way of charging EVs.”

Navigant forecasts that wireless charging equipment for light-duty vehicles will grow by a compound annual growth rate of 108% from 2013 to 2022, reaching annual sales of some 300 000 units in 2022. Another recent forecast indicates that by 2019, WPT for the EV market is expected to be worth around $4.6 billion.

With the high power transfer capability of WPT comes the possibility of rapid charging.

Projects already are using high power systems for commercial vehicles, and increasing power capacity is one key area of research. For instance, in March 2016, a 20 kW wireless charging system was demonstrated at the U.S. Department of Energy’s Oak Ridge National Laboratory (ORNL) running at 90% efficiency. Working with companies including Toyota and Evatran, the researchers say they are looking ahead to their next target of a 50 kW WPT system. (See an ORNL video on its WPT technology.)

Nissan is expected to launch a unit of more than 7 kW in the coming year, doubling the transfer capacity of its early developments. And Qualcomm has developed a 7.2 kW system, also doubling the capacity of a previous version.

However, at higher powers, safety becomes more of a concern. Mahlein says that current WPT systems are in a frequency range of 20 to 140 kHz. What’s more, 140-150 kHz is the starting point of broadcast radio applications; “this is also something that needs to be borne in mind,” he says.

As a result, mechanisms to address the possibility of animals, people or even waste such as aluminized paper entering a strong magnetic field are being researched.

Oak Ridge’s Power Electronics Team lead, Madhu Chinthavali, says that the high-frequency magnetic fields used in power transfer across a large air gap are “focused and shielded.” This means that magnetic fringe fields fall to levels below limits set by international standards, including inside the vehicle, to ensure personal safety.

The role of International Standards

This JPT, in which some 70 experts from 13 participating members are active, has published IEC 61980-1:2015, which deals with general requirements for electric vehicle WPT systems, and is preparing additional Standards in the IEC 61980 series to cover specific requirements for communication between EVs and infrastructure, as well as for magnetic and electric field power transfer systems.

Freeman says that “interoperability is something that’s going to be transformative for wireless power transfer. Standards can be a key enabler of getting interoperability.”

Freeman says that the success in terms of helping to catalyze EV adoption likely will come when “people stop worrying about it.” Wireless power transfer is poised to be a key enabler in achieving that goal.