Industry partners Toyota, Cisco Systems, Evatran and Clemson University International Center for Automotive Research contributed to the technology, which they say will help boost the adoption and convenience of electric vehicles. 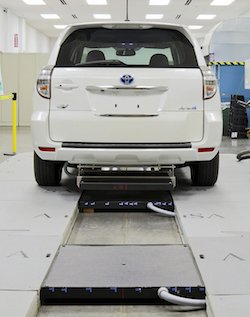 The researchers are already looking ahead to their next target of 50-kilowatt wireless charging, which would match the power levels of commercially available plug-in quick chargers. Providing the same speed with the convenience of wireless charging could increase consumer acceptance of electric vehicles and is considered a key enabler for hands-free, autonomous vehicles. Higher power levels are also essential for powering larger vehicles such as trucks and buses.

Safety is a chief consideration as the researchers advance their system to higher power levels.

"The high-frequency magnetic fields employed in power transfer across a large air gap are focused and shielded," says Madhu Chinthavali, ORNL Power Electronics Team lead. "This means that magnetic fringe fields decrease rapidly to levels well below limits set by international standards, including inside the vehicle, to ensure personal safety."

By posting a comment you confirm that you have read and accept our Posting Rules and Terms of Use.
Advertisement
RELATED ARTICLES
EV wireless charging moves closer to reality with Volvo investment
Wireless Power Transfer: A Key Technology for EV Adoption
EV Charger Is in Development by Solstin
Electrify America Names These Vendors to Supply its EV Charging Network
Charging an Electric Car Without the Plug
Advertisement