Efforts to curb carbon emissions via government automobile regulation means that ultra-low emission vehicles, including pure electric vehicles (EVs) and plug-in hybrids, will play an increasing role in the way we travel.

In California, for instance, by the 2025 model year, 15.4% of projected statewide sales of 1.75 million cars and light trucks sold by automakers will have to be zero emission vehicles (ZEVs). California will not be alone. Federal law permits other states to adopt California’s automotive emissions rules if they are stricter than federal regulations (and they are, since there is at present no federal ZEV mandate). As a result, nine other states and the District of Columbia say they will follow California and institute their own ZEV requirements.

However, among the current obstacles to widespread adoption of EVs are their long charging times and lack of available charging stations. Currently, the most common EV or hybrid EV power transfer system is the plug-in electric charger. These usually charge at between 3 kilowatts (kW) and 50kW (some, like the Tesla supercharger, can go up to 120kW) while the vehicle is stationary and switched off. This solution is adequate for charging at home or in parking garages since the vehicle must spend considerable time standing still.

However, what if the EV charging infrastructure could be extended via the application of inductive power transfer to the vehicle during driving? The concept is called Dynamic Wireless Power Transfer (DWPT) and studies have shown that introducing DWPT on roadways would increase the likelihood of consumers using an EV as their main car. The technology would address driver concerns about restricted driving range and the possibility of running out of power between charging stations.

From Tesla to Test Track 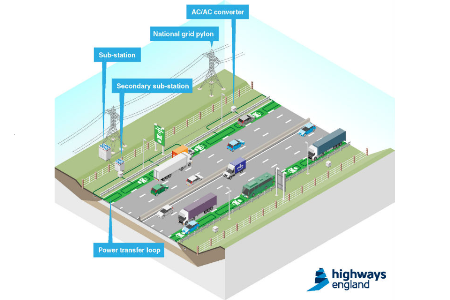 The notion that resonance could be used to improve wireless power transmission is well known. In 1894, Nikola Tesla was granted a patent for a resonant inductive coupling to supply electric current to the motors of streetcars from a stationary source. He proposed doing so without the use of contacts between the line conductor and the car motor.

Charge-as-you-drive technologies have already been pioneered in several places. In South Korea, the Korea Advanced Institute of Science and Technology (KAIST) has developed a wireless power transfer technology called OLEV, short for On-Line Electric Vehicles. It works using technology embedded beneath the road.

In the town of Gumi, a route has been built that allows buses to recharge while in motion. The technology supplies 60 kHz and 180 kW of power wirelessly to the transport vehicles. The route length is 35km, and the length of the DWPT section is 144m, comprised of four DWPT sections. Two buses are equipped to recharge while driving over this roadway; the OLEV buses have coils on their underside to pick up power through the electromagnetic field on the road. The DWPT system enables the buses to reduce the size of the reserve battery used to one-fifth that of the battery on board a typical electric car.

Bombardier, a leading manufacturer of planes and trains, has developed a charging system for trams called PRIMOVE. The technology allows vehicles to run continuously without overhead lines. A research project undertaken by Flanders DRIVE, a research organization supported by the Flemish government, allowed Bombardier to test its inductive charging technology on road-based vehicles using a test track built on a public road. During a feasibility study in Lomel, Belgium, between 2011 and 2013, a bus was retrofitted with the first-generation PRIMOVE system. 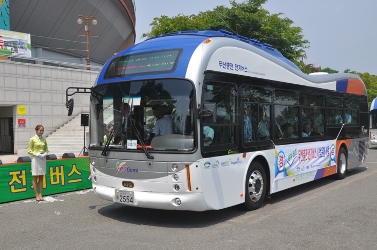 Two buses are equipped to recharge while driving over this roadway; the OLEV buses have coils on their underside to pick up power through the electromagnetic field on the road.inductive energy transfer for electric buses both while parked (static charging) and while moving (dynamic charging). Bombardier is currently implementing a 200kW system for electric buses in Bruges, Belgium as well as in Braunschweig, Mannheim and Berlin in Germany. On the automotive side, the PRIMOVE team reports that it can offer its technology at three levels of charging power: 3.6kW, 7.2kW and 22kW.

Meanwhile in the United States, Utah State University has built an EV, roadway research facility and test track that uses wireless inductive power transfer pads embedded underneath the roadway. The installation allows EVs to charge while they are in motion. The facility, called EVR (for electric vehicle and roadway) has capacity for 750 kW of power with AC-to-track and DC-to-track provisions. Construction of the test track and lab building is complete with equipment, including a dynamometer for testing vehicle capabilities in place. Utah State’s EVR should be fully operational in the fall of 2015.

One of the most ambitious trials may be in the UK where the government agency Highways England has announced plans to carry out test track trials of a wireless road-embedded EV charging technology. The trials will involve fitting vehicles with wireless technology and testing the equipment installed underneath the road. The trials are expected to last for approximately 18 months and, subject to the results, could be followed by tests on existing motorways. Additional details of the trials will be made available when a successful contractor has been appointed.

The upcoming trial follows a feasibility study conducted by Highways England that examined how wireless charging infrastructure might be installed in the country’s major roads. Two different example layouts for DWPT systems were investigated in the study:

The Highways England analysis showed that under different traffic conditions—and using an assumed scenario for vehicle and technology penetration—average demand could be as high as 500kVA (0.5MVA) per mile. When use of the system fell short of the maximum value, the expected demand was found to be similar across both layouts. The number and length of segments under these conditions would not have an impact on total power demand, the study showed, as the number of power transfer segments that can be occupied is limited by the number of vehicles on the road. Power demand from the second layout example was found to be slightly higher than from the first example due to the higher power transfer capability for heavy-duty vehicles.

While the study concluded that systems with shorter coil lengths (up to 10m) are likely to be safer and better able to cope with higher utilization, different coil lengths will be investigated during the trials to understand the variability and implications on safety.

Both of the first two methods were found to be viable. The study concluded that the full lane pre-fabricated method is likely to be prohibitively expensive, although further investigation is required as this is a relatively new construction technique. The upcoming trials are expected to offer more data for all three proposed construction methods.