Researchers have developed a technique for coating polymer implants with a bioactive film that significantly increases bonding between the implant and surrounding bone in an animal model. The advance could improve the success rate of such implants, which are often used in spinal surgeries. 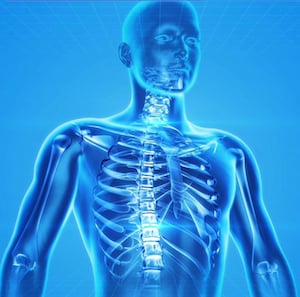 The polymer in question is called polyether ether ketone, or PEEK, which has mechanical properties similar to bone that make it attractive for use in spinal implants. However, PEEK doesn’t bond well with bone. To that end, researchers had previously developed a technique for coating PEEK with a substance called hydroxyapatite (HA), a calcium phosphate. Proof-of-concept studies were promising, but researchers found they were able to apply the HA coating only to flat surfaces and had not tested HA-coated implants in an animal model.

“The first step of the HA-coating technique coats a PEEK implant with a thin film of yttria-stabilized zirconia (YSZ). The second step applies a coating of HA. The researchers then heat the HA layer using microwaves, with the YSZ layer acting as a heat shield to prevent the PEEK from melting. Meanwhile, the heat gives the HA a crystalline structure that makes it more stable in the body, meaning the calcium phosphate will dissolve more slowly and promote bonding with the surrounding bone.

The researchers used microscopic evaluations of tissue cells and three-dimensional X-ray imaging to assess the performance of all three types of implants. Eighteen weeks after surgery, the researchers found that both types of HA-coated implants had more than double the bone formation of PEEK alone, with comparable bone density. The HA-treated implants also had higher bone-to-implant contact ratios than PEEK alone.

The researchers also did biomechanical testing on the implants, assessing how well they bonded to the surrounding bone. To test this, the researchers conducted what is called biomechanical push-out testing, in which force is applied to an implant until it is dislodged.

By posting a comment you confirm that you have read and accept our Posting Rules and Terms of Use.
Advertisement
RELATED ARTICLES
Researchers Bling It On with Diamond-coated 3D-printed Implants
Video: Smarter medical implants with 3D-printed honeycomb plastics
Sugary coating may improve implants in osteoporotic environments
Infection-resistant coating could prevent implant infections
Watch: Bacteria-Killing Graphene Spikes May Prevent Implant Infections
Advertisement