In the face of adversity, fossil-fueled power plants endure; their dominance won’t go away any time soon.

For many years “King Coal” was responsible for the bulk of U.S. electricity production. However, the landscape has shifted significantly and will continue to change. Coal and natural gas currently run neck and neck as they provide equal shares to two-thirds of U.S. electricity. 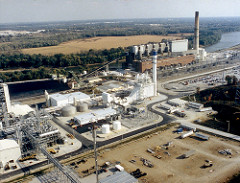 The process of power generation is basically the same as it was in 1882 when Thomas Edison’s Pearl Street Station in New York City pioneered the centralized power plant. To this day, most plants still boil water and capture the steam to drive a turbine which spins a generator to make electricity. The problem is that the coal plants’ single steam cycle can only achieve about 40% thermodynamic efficiency. 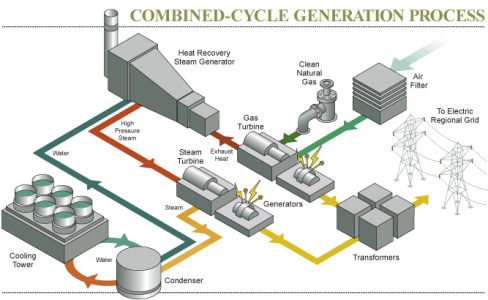 (Click to enlarge) Schematic of how a CCNG power plant works. Image source: Rolling Hills Generating In contrast, combined-cycle natural gas plants use an additional cycle which improves overall efficiency. Akin to a jet engine using a Brayton cycle, natural gas first fuels a combustion chamber that has an upstream rotating compressor. This compressor is coupled to a downstream turbine that drives an electrical generator. Hot exhaust gases from this process are channeled to a heat recovery steam generator (HRSG) which drives an additional turbine/generator set using the Rankine cycle. Hence the term “combined-cycle,” as it exploits both Brayton and Rankine cycles. Doing so can achieve best-in-class efficiency up to 60% in base-load operation.

Combined-cycle plants may not be as green as wind, solar or hydro, but natural gas is a cleaner alternative to coal. Natural gas produces half the carbon dioxide, less than one-third of the nitrogen oxides, and around 1% as much sulfur oxides as coal. Emission regulations have incentivized U.S. utilities away from coal and toward natural gas, both through closing coal plants and pursuing natural gas plant development. As the U.S. Environmental Protection Agency (EPA) has jurisdiction over power plant emissions, it recently introduced the Clean Power Plan (CPP) which targets existing power plants and reduces carbon emissions for the first time. All of this thrusts new combined-cycle construction into the limelight.

Traditionally, power generators were skeptical about putting too many eggs in the natural gas basket due to the fuel’s price volatility. However, the recent growth of domestic shale production coupled with pipeline network expansions has mitigated extreme price swings. Events such as elevated demand from a winter cold spell no longer have the same ability to trigger volatility as in the past. Additionally, generators are now more inclined to switch from coal to gas or vice-versa when the price of either commodity becomes unattractive.

These factors tend to keep prices range-bound. A level of comfort now exists to the extent that many utilities are willing to invest more fully in gas generation. Several industry experts expect natural gas prices to average $3-$4/MMBtu in the long run. Although not an apples-to-apples comparison, these price points bring natural gas costs into the realm of average delivered coal costs. (Of course, emission costs, fuel supply contract terms and the workings of fuel markets tend to complicate ease of cost evaluations.)

Combined-cycle plants are the least expensive to build among almost all current options. Smaller land requirements and faster, less expensive construction enable capital costs savings. The cost of building combined cycle units averages around $1,000/kW. When compared to renewables, this is roughly half the cost of an equivalent amount of wind generation and 20% that of solar. Additionally, technological improvements over the past 20 years have thrust gas beyond its competitors. Startup times have improved to 10 minutes from 60 minutes. Virtually no other technology can deliver several hundred megawatts to the power grid in so little time.

What About Renewables and Nukes?

Renewables currently provide 14% of domestic supply and are projected to double by 2040. Renewables are naturally replenishable energy resources such as wind, sunlight, rain, tides, waves and geothermal heat. Although not necessarily a silver bullet, it’s fair to say renewables will be indispensable for years to come. As each form of renewable energy has its unique challenges, disagreement exists on how bright each one's future is or which technology will dominate.

When considering actual economic cost, hydroelectric power (hydro) can be the least expensive method of electricity production. Harnessing the power of falling water goes back to ancient times and provides green, safe and flexible power. Although construction is costly, once built, labor and fuel costs are negligible in comparison. If properly managed and maintained, a hydro unit can remain in service for many decades.

The U.S. Department of Energy (DOE) estimates another 65 GW of hydro capacity is currently untapped and could be developed to provide 11% of generation demand. Major drawbacks include high upfront capital expenses, water loss through reservoir evaporation and environmental impact. Hydro’s dependency on water supply is also tied to local climate and geography. Unfortunately, due to water conservation and territorial disputes, new hydro development suffers criticism for its potential adverse political, economic and environmental effects. 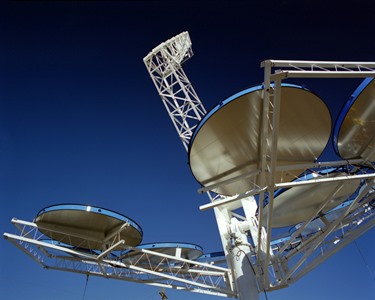 (Click to enlarge) A prototype solar collector. Image source: NRELAn inexhaustible source of energy, solar can continue to produce electricity so long as our earth is habitable. The sun’s energy is totally free and available to all. It leaves no carbon footprint and it’s free from pollution, emission or noise. Solar installation startups are expensive, however, and can require significant amounts of land which perpetuate land degradation and wildlife habitat loss. Depending on the technology, large utility-scale systems currently require several acres for each megawatt produced. Environmental impact may be mitigated by siting facilities in low population areas or along existing utility corridors.

But just as the sun rises every day, it also sets in the evening and is unavailable for electricity production a significant portion of time. Ideally, if power storage technologies evolve and mature through batteries or pumped hydro, solar could represent the sole source of energy throughout the world.

Similar to solar, wind power is clean, inexhaustible, relatively inexpensive to operate and presents large potential. Wind also fluctuates, however, often rendering it unsuitable to meet baseload energy demand. Although startup costs have fallen over the years, the manufacture and installation requires large upfront investments. Wind turbines pose a threat to wildlife (such as birds and bats), generate noise and to some are aesthetic eyesores. 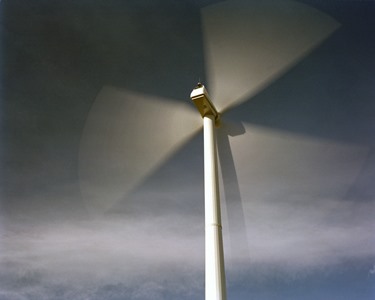 A utility-scale wind turbine. Image source: NREL Electricity demand is largely for continuous and reliable supply. Only a fraction of demand is for predictable shorter-term (that is, peak-load) requirements. When renewable sources are linked to the grid, back-up capacity uncertainty arises. Stand-alone, large-scale system energy storage is required for either wind or solar to displace traditional base-load generation. Presently, few economical power storage technology options exist.

Perhaps the greatest friends to renewables are the political forces enabling them. Tax credit extensions or the potential promulgation of the CPP rules for new and existing sources serve to sustain renewables which would not otherwise survive. While wind and solar will play a respectable role they cannot replace gridline electricity and struggle to sustain themselves without subsidization.

Nuclear currently provides 20% of domestic supply and is projected to decline to 15% by 2040. The big problem is that so much disagreement exists regarding what nuclear represents. Is it the safest and cleanest generating source or is it the exact opposite? Similar to the anthropogenic climate change debate, a polarized political atmosphere coupled with an overabundance of misinformation make rational discussion a fool’s errand.

Successor to the Throne

With the exception of parts of Southeast Asia, where coal plant construction remains in vogue, “King Coal” has been reduced to providing 33% of U.S. electricity and less than 15% elsewhere, especially in the European Union (EU). Some existing U.S. coal plants will survive but new construction is unlikely to occur.

While wind and solar are romanticized as the “heirs apparent” to coal-fired power plants, the real successor to the throne is the natural gas combined-cycle generator. New natural gas combined-cycle plants are more efficient, less expensive and faster to build. They typically encounter less local resistance and produce fewer emissions. Although renewables will surpass coal’s projected share by 2040, new capacity will be dominated by natural gas. The Clean Power Plan (CPP), combined with low natural gas prices, will enable fossil fuels to maintain their reign through combined-cycle natural gas generation.

By posting a comment you confirm that you have read and accept our Posting Rules and Terms of Use.
Advertisement
RELATED ARTICLES
Coal Use Falls as Power Sector Shifts to Gas
Cost Factors Help Natural Gas Edge Out Coal for Power, EIA Says
Gas-fired power generation is leaving coal in the dust
A Comeback for Coal May Be Hard to Engineer
EIA forecasts a drop in this summer's electricity production
Advertisement