Natural gas-fired generators accounted for 42% of the operating electricity generating capacity in the United States in 2016. 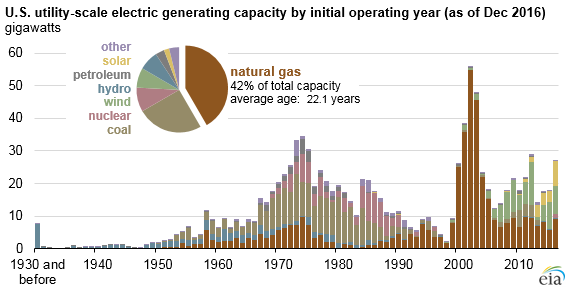 Gas technology was overbuilt in the early 2000s, but is now playing a lead role in the generation mix.The increase in natural gas generation since 2005 largely stems the continued cost-competitiveness of natural gas relative to coal, according to the Energy Department's Energy Information Administration (EIA).

EIA says that natural gas-fired combined-cycle units accounted for 53% of the 449 gigawatts (GW) of total U.S. natural gas-powered generator capacity in 2016. Combined-cycle generators have been a popular technology choice since the 1990s and made up a large share of the capacity added between 2000 and 2005. 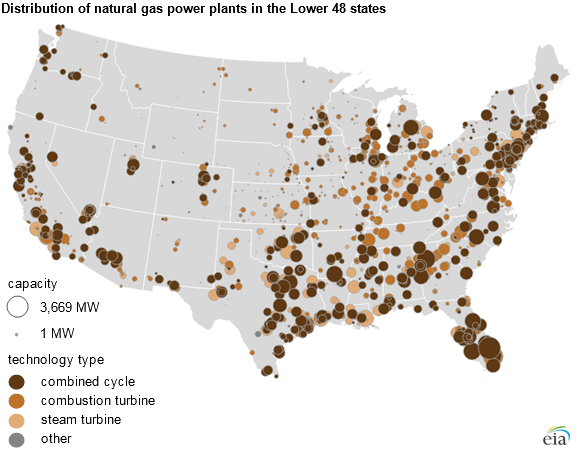 Every state but Vermont has at least one natural gas-fired power plant.Under current natural gas and coal market conditions in many regions of the country, combined-cycle generating units are often used as baseload generation, and operate throughout the day.

Other types of natural gas-fired technology, such as combustion turbines (about 28% of total natural gas-powered generator capacity) and steam turbines (17%), generally only run during hours when electricity demand is high.

Every state except Vermont has at least one natural gas plant. About 38% of U.S. natural gas-fired generation capacity is located in four states: Texas, California, Florida, and New York. Natural gas power plants account for more than half of the total electricity generating capacity in each of these four states and in seven other states.

The average capacity factor, a metric that measures the utilization of power plants, for natural gas combined-cycle units has increased from 43% in 2011 to 56% in 2016. The upward trend highlights the growing contribution of natural gas-fired combined-cycle generators, which traditionally served peaking and intermediate loads, but have increasingly become more common to meet baseload demands.

By posting a comment you confirm that you have read and accept our Posting Rules and Terms of Use.
Advertisement
RELATED ARTICLES
Efficiencies Improve for Natural Gas Power Plants, EIA Says
Gas-fired power generation is leaving coal in the dust
This state has added the most natural gas generating capacity
Fossil Fuel Use for Power Fell in 2017, EIA Says
Power Demand Fell in 2017, Hitting Both Coal and Natural Gas
Advertisement