Hong Kong Polytechnic University (PolyU) researchers have developed perovskite-silicon tandem solar cells with a power conversion efficiency of 25.5%—the highest ever recorded. At this level, they estimate, solar energy could be generated at a cost of USD 0.35/W, compared with USD 0.50/W for existing silicon solar cells.

Perovskite solar cells first appeared in 2009 with an efficiency of just 3.8%. With their outstanding photovoltaic properties, they have become the focus of vigorous research for their potential to provide sustainable power generation.

In their research, the PolyU team, led by Professor Charles Chee Surya, of the Department of Electronic and Information Engineering, proceeded from the assumption that employing a combination of materials to make solar cells would be most effective in enabling energy absorption. Methylammonium lead tri-halide perovskite and silicon solar cells, for example, form a complementary pair. With the perovskite solar cell functioning as a top layer, it can harvest the short wavelength photons, while the bottom layer, coated with silicon, is designed to absorb the long wavelength photons. 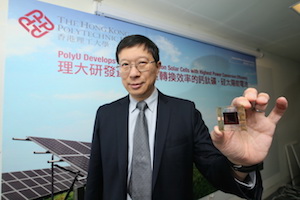 PolyU Professor Charles Chee Surya holds a perovskite solar cell. Image credit: Hong Kong Polytechnic University.The PolyU research team maximized efficiency by making use of this approach with three innovative techniques. First, the team developed a low-temperature annealing process in dry oxygen to reduce the impact made by perovskite defects. Second, the team fabricated a tri-layer of molybdenum trioxide/gold/molybdenum trioxide with optimized thickness in each layer, making it highly transparent to allow light to penetrate the silicon layer underneath the perovskite layer. Finally, by mimicking the surface morphology of rose petals, a haze film developed by Dr. Zijian Zheng, of PolyU's Institute of Textiles and Clothing, was applied as the top layer of the solar panel to trap additional light.

The PolyU researchers say they will continue improving the power conversion efficiency and work toward the large-scale fabrication of perovskite-silicon solar cells using these techniques.