Perovskites have emerged as a promising alternative to silicon for manufacturing inexpensive and efficient solar cells. However, most of these materials contain lead and include organic materials that are not particularly stable when exposed to the environment.

A new titanium-based alternative for designing lead-free, inorganic perovskite solar cells has been developed by researchers from Brown University and University of Nebraska – Lincoln.

Perovskites with cesium, titanium and a halogen component (bromine or/and iodine) were used to produce semi-transparent perovskite films with a bandgap — a measure of the energy level of photons the material can absorb — of 1.8 electron volts, which is deemed ideal for tandem solar applications. The material delivered a conversion efficiency of 3.3 percent, well below that of lead-based cells but a good start for an all-new material.

A high-temperature evaporation method was used to prepare the films, but the team is investigating alternative methods, including low-temperature and solvent-based routes, in order to reduce cell fabrication costs.

Other candidate materials have been tested for this application, including a lead-free perovskite made largely from tin. This material rusts easily when exposed to the environment, while titanium is rust-resistant. The titanium-perovskite also has an open-circuit voltage — a measure of the total voltage available from a solar cell — of over one volt. Other lead-free perovskites generally produce less than 0.6 volts.

The material’s relatively large bandgap compared to silicon makes it a prime candidate to serve as the top layer in a tandem solar cell. The titanium-perovskite upper layer would absorb the higher-energy photons from the sun that the lower silicon layer can’t absorb because of its smaller bandgap. Lower energy photons would pass through the semi-transparent upper layer to be absorbed by the silicon, thereby increasing the cell’s total absorption capacity.

The research is published in the journal Joule. 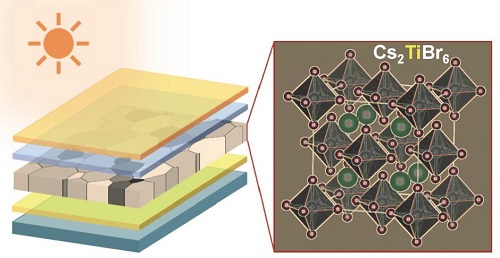