Siemens researchers have developed prototype spider-like robots, "SiSpis," that can work collaboratively to print structures and surfaces, thus potentially accelerating production of large-scale, complex forms such as the fuselages of planes and the hulls of ships.

“SiSpis are part of a larger picture that we define as Siemens Agile Manufacturing Systems, and they represent the core of our autonomous systems research here in Princeton,” says Livio Dalloro, who heads the Product Design, Modeling and Simulation Research group in the Automation and Control Technology Field at Siemens Corporate Technology.

Dalloro says that the spider-like bots are essentially fully autonomous additive manufacturing devices with legs. Each spider is equipped with an extruder similar to those on traditional 3D printers, but is limited—for now—to using a cornstarch-and-sugarcane printing substance known as poly lactic acid. 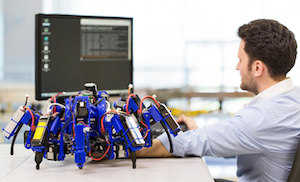 The spiders could work collaboratively to manufacture a wide range of structures. Image credit: Siemens.

According to Siemens, each spider is capable of manufacturing only a small portion of a work piece. The process is supported by algorithms that allow multi-robot task planning so that two or more devices can collaborate on the additive manufacture or surface processing of a single object or area.

To accomplish this, the robots use onboard cameras as well as a laser scanner to interpret their immediate environment. Knowing the range of its 3D-printer arm, each robot autonomously works out which part of an area it can cover—regardless of whether the area is flat or curved—while other robots use the same technique to cover adjacent areas. By dividing each area into vertical boxes, the robots can work collaboratively to cover even complex geometries in such a way that no box is missed.

Autonomy is a central part of other spider behaviors as well. For instance, the spiders know where they are in a given environment. When its batteries are low after about two hours, a spider will find its way back to a charging station, but not without first transmitting its data to another spider that has just been charged, thus allowing the second spider to pick up exactly where the first one left off. Also, whenever they encounter an obstacle, the spiders autonomously find a path around it.

Siemens’ spider-worker project was initiated in January 2014. “Its goal,” says Dalloro, “was to create a prototype platform for autonomous manufacturing machines that can understand a task, split it up among available robots and enter into a manufacturing process in a collaborative and coordinated way without explicit programming.”

Where do the spiders go from here? Clearly, the researchers have achieved their initial goal of developing a system that is characterized by maximum autonomy and minimum programming requirements. “Once the technology becomes mature,” says Siemens research scientist Hasan Sinan Bank, “it could be applied to almost anything.”

By posting a comment you confirm that you have read and accept our Posting Rules and Terms of Use.
Advertisement
RELATED ARTICLES
Watch these dead spider legs become reanimated
Better Hearing with Spider Silk
Team produces adhesive from spider silk
What's in a Name for New Spider Species?
Unique Spider Silk Is Better than Kevlar
Advertisement