San Francisco's century-old Northern Waterfront Seawall, which simultaneously provides flood and wave protection to the city and underpins many of the waterfront structures of the historic Embarcadero district, requires up to $3 billion in reinforcements to harden it against the threat of major earthquakes.

A report released by the Port of San Francisco, based on a study by engineering firms GHD and GTC, says that risks to the seawall are greater than previously understood. The weak soils below the seawall are highly susceptible to lateral spreading along its entire three-mile length, increasing the expected damage to structures and infrastructure adjacent to the seawall in event of a major earthquake. 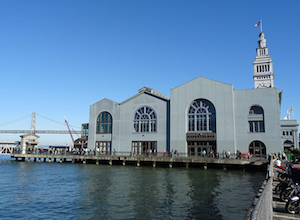 Historic structures built on the seawall are at risk if "the big one" hits San Francisco. Image credit: Pixabay. Other findings of the study, according to the report, include:

While the seawall has already survived over 100 years in an active earthquake zone, the infrastructure has not yet weathered a major earthquake. Most of the bulkhead buildings and piers in the Northern Waterfront were built after the great 1906 earthquake, the report notes.

The 1989 Loma Prieta earthquake, while damaging, was only a minor test of the seawall itself, the report adds. If a similar-sized earthquake were to occur 10 miles away on the San Andreas Fault, rather than 60 miles away, it would likely cause much higher levels of ground shaking, seawall movement and damage.

To significantly improve the resiliency of the seawall and waterfront, the "most promising mitigation options," according to the report, are:

In consideration of the potential for sea-level rise, the Port of San Francisco says costs could reach $5 billion to fully incorporate adaptation measures needed "for the next 100 years."