Texas Coast Protection Could Cost $31b

A draft plan costing upwards of $31 billion and intended in part to protect the Texas Gulf Coast from storm surges was released by the Texas General Land Office (GLO) and the United States Army Corps of Engineers (USACE).

Work on the Coastal Texas Protection and Restoration Study Draft Integrated Feasibility Report and Environmental Impact Statement began in 2015 and is intended to develop risk reduction options to address storm risks to the Texas coastline. 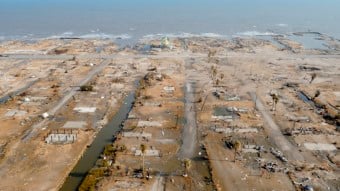 According to the report, one in every four Texans lives in the state's coastal area. Around 30% of the U.S. oil refining sector is located in the region. And the Port of Houston and the Port of Beaumont are the second and fourth busiest ports in the United States with around 428 million tons of cargo passing through the region each year. The Port of Beaumont handles more military cargo than any other U.S. port.

The study area for the Coastal Texas Study consists of the entire Texas Gulf Coast from the mouth of the Sabine River to the mouth of the Rio Grande, and includes the Gulf and tidal waters, barrier islands, estuaries, coastal wetlands, rivers and streams, and adjacent areas. (Read "These 6 Steps Could Protect Against Future Hurricane Flooding.") 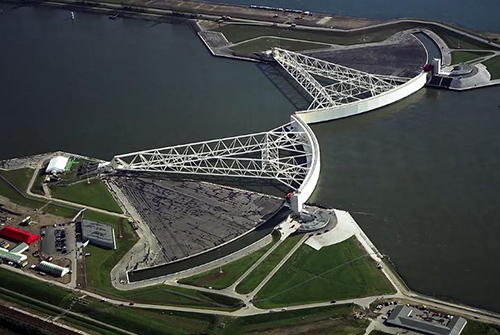 The structure would have an 800-foot opening for ship traffic that could be closed during a storm. On each side of the opening, a gate on a ball and socket would swing together to close. Source: Texas A&M FoundationFlood Walls and Barrier Gates

The largest feature would be at Bolivar Roads between Bolivar Peninsula and Galveston Island, which includes surge barrier gates that are made up of navigable floating sector gates and environmental lift gates, and a combi-wall made up of vertically driven piles with a battered support pile and a reinforced concrete cap.

The protection project is known as the Ike Dike, named after Hurricane Ike, which caused around $30 billion in storm surge damage in September 2008. The Ike Dike project was conceived by professor Bill Merrell of Texas A&M University at Galveston, and received renewed interest after Hurricane Harvey deluged the region with rain in 2017. 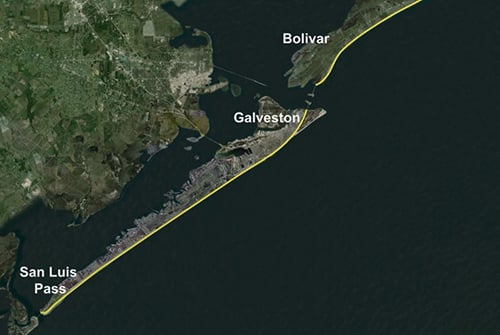 Map of proposed surge defenses near the ports of Galveston and Houston. Source: Texas A&M FoundationHurricane Harvey made landfall as a category four hurricane near Rockport, Texas, on Aug. 25, 2017, and impacted more than 40 counties in the state. At the time, it was the costliest natural disaster in Texas history, and the second most costly natural disaster in U.S. history, behind only Hurricane Katrina.

The final feasibility report and environmental impact statement is expected in 2021. Project backers then would seek federal funding for the project.

Re: Texas Coast Protection Could Cost $31b
#1

Wouldn't it be cheaper to move?