The Precision (and Promise) of the James Webb Space Telescope 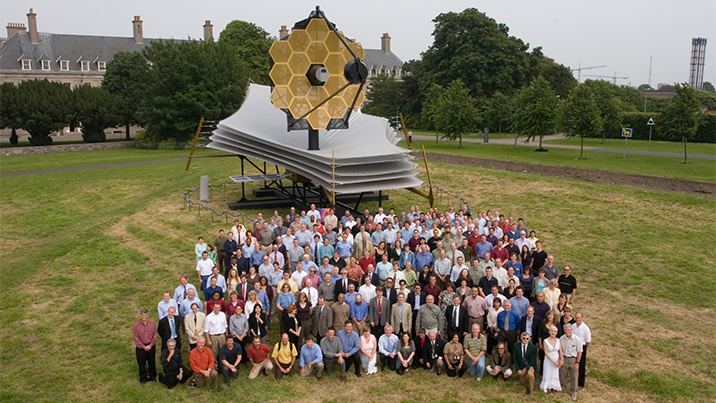 The James Webb Space Telescope (JWST) is a large space-based observatory scheduled for launch in October 2018. Originally called the Next Generation Space Telescope (NGST), it was renamed in 2002 in honor of James E. Webb, second administer of the U.S. space agency, NASA. The telescope is designed to be a successor to the Hubble Space Telescope. When it becomes operational in 2018, the JWST is expected to advance human understanding of the universe, just as Hubble did 25 years ago.

The JWST has been tasked with observing the first galaxies that formed after the Big Bang. It will do so by peering farther than any telescope before it, up to 13.5-billion light-years away. That ability should allow it to observe the universe when it was 100-250 million years old, a relative infant. By studying the light from these early galaxies as well as from closer galaxies, the telescope will help scientists determine how galaxies have evolved. Due to the expansion of space, which causes larger and larger red-shifts in objects the farther they are away, the JWST is designed to view the universe in the near-infrared (near-IR) and mid-infrared (mid-IR) ranges.

These wave lengths will also allow the JWST to observe stars and planets during their first stages of formation, peering through the dust that surrounds these planetary systems. Its onboard detectors will directly detect exoplanets (a planet that orbits a star other than the sun) by their infrared emissions. The JWST will also be used to detect objects within our own solar system. Anything beyond its orbit in our solar system will be observable. This will be especially relevant for the so-called Kuiper belt objects that lay up to 50 astronomical units beyond Neptune's orbit.

In addition, the JWST will be able to analyze the spectrum of objects it observes through onboard spectrographs. This will allow for analysis of the chemical composition, temperature and other characteristics of the galaxies, stars and planets it observes. Its instruments will be so sensitive that it may be able to detect the signatures of life in a distant planetary atmosphere.

All of this science comes at a cost. The telescope was first conceived in the mid-1990s and had a preliminary estimated cost of $500 million. After five years of research on the technology needed, NASA awarded an $824.8 million contract for JWST to contractor TRW, later acquired by Northrup Grumman (today's primary contractor). That contract award was to prove overly optimistic given the extraordinary technology required.

One of the ongoing narratives regarding the JWST is its cost overruns and launch delays. Originally slated to launch in 2009 at a cost of about $1 billion, the launch date has been pushed back by almost a decade to 2018. The U.S. Congress even went so far as to propose cancelling the program in 2011, but a last-minute deal between the U.S. House of Representatives and the Senate was reached and the spending on the JWST was capped at $8.8 billion.

JWST's predecessor, the Hubble Space Telescope itself had many cost overruns and was even cancelled in 1974 until scientific organizations successfully lobbied to have its funding reinstated. By the time Hubble was launched, it was seven years late and $2 billion dollars over the budget. (Its original budget was estimated at $400 million.) The cumulative costs of Hubble have reached $10 billion as of 2015.

The JWST is essentially a giant Korsch telescope. A Korsch telescope uses a three-mirror design that corrects for spherical aberration, coma and astigmatism. The primary mirror of a Korsch telescope is the principal light-gathering surface. The JWST has a gold-coated beryllium primary mirror with a 21.3 feet (ft) diameter, which will give it seven times the light collecting area of Hubble. Beryllium's light weight and stiffness make it an ideal material for large mirrors.

The JWST mirror is segmented so that it will fit in the Ariane 5 launch vehicle. As a result, it consists of 18 hexagons that will unfold after the launch. The JWST will use image plane wavefront sensing through phase retrieval to unfold and position the mirror segments correctly with micromotors. Once unfolded, the mirror will use a fast-steering mirror for image stabilization and will have an angular resolution of better than 0.1 arc-seconds at 2 µm. That's the equivalent of making out a soccer ball in an image taken from 340 miles away. 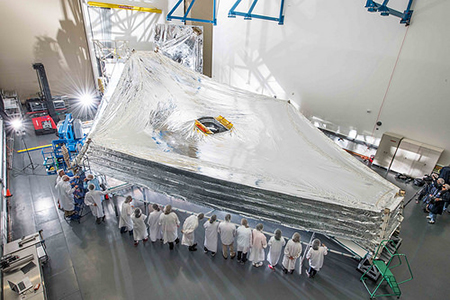 A five-layer 40 ft x 60 ft shield will protect the telescope mirrors and detectors from sun-, earth- and moon. Image source: NASATo protect its heat-sensitive infrared detectors and mirrors, the JWST will be launched to the Sun-Earth second Lagrange point (L2) some 926,811 miles from Earth, a trip that will take roughly three months to complete. It will have a five-layer 40 ft x 60 ft sunshield to protect its mirrors and detectors from the Sun, Earth and Moon. This shielding is critical since all the JWST detectors and optics need to be kept below -370° F. One consequence is that the JWST will not be able to view the solar system inside of its L2 orbit.

The NASA Deep Space Network will be used to communicate with JWST. It will be designed to operate for five years with a goal of 10 years. Since manned spaceflight does not currently approach L2, there will be no opportunity for maintenance; whatever condition the JWST arrives in at L2 in will be the condition it stays in. Engineers working on the JWST must get it right the first time.

The JWST will carry a collection of high-tech detectors for imaging and analyzing the light it gathers. These detectors will include a near-IR Camera (NIRCam), a near-IR Spectrograph (NIR Spec), a mid-IR Instrument (MIRI), a near-infrared imager and slitless spectrograph (NIRISS) and a fine guidance sensor (FGS).

The NIRCam, supplied by the University of Arizona, will be the JWST's primary imager for wavelengths 0.6 µm to 5 µm. The NIRCam will be equipped with coronagraphs, which will allow astronomers to take pictures of faint objects located close to bright objects such as stars or galaxy cores. The NIR Spec, provided by the European Space Agency (ESA), will also operate from 0.6 µm to 5 µm, and will be used to disperse collected light into a spectrum. This will provide astronomers the opportunity to study the temperature, mass and chemical composition of imaged objects such as galaxies, stars and planets using spectroscopy. Since it can require hundreds of hours to capture adequate light to form a spectrum from a faint object, this spectrograph is designed to observe 100 objects simultaneously using a microshutter array with components no wider than a human hair.

The MIRI, provided by the European Consortium, the ESA and NASA, will cover the wavelength range 5 µm to 28 µm. It is designed to detect the red-shifted light of distant galaxies, newly forming stars and Kuiper Belt objects. It will provide wide-field, broadband imaging. It also contains a spectrograph over the same wavelength band that will provide medium-resolution spectroscopy.

Finally, the fine guidance sensor (FGS), packaged with the NIRISS and also provided by the Canadian Space Agency, is a sensitive camera that will support the telescope's attitude control system (ACS). The FGS identifies preselected guide stars to provide the ACS with centroid measurements 16 times per second to ensure precision positioning. 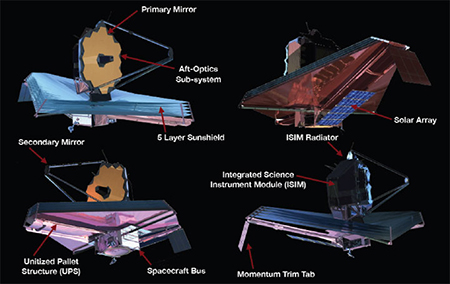 The JWST will carry a collection of high-tech detectors for imaging and analyzing the light it gathers. Image source: NASAThe NIRCam, NIRSpec, NIRISS, and FGS will all use mercury cadmium telluride (HgCdTe) detectors made by Teledyne Scientific and Imaging. They will operate at about-389°F, using a passive cooling system. MIRI will use an arsenic-doped silicon (Si:As) detector built by Raytheon. It will operate at -447°F using a helium cryocooler system. Northrop Grumman recently has been troubleshooting a problem with the cryocooler, but reported to Congress that it had made significant progress resolving the issue.

The NIRCam, NIRSpec and FGS will all use a SIDECAR ASIC for data processing. The acronym is short for System for Image Digitization, Enhancement, Control and Retrieval. It is something of a feat of engineering: a low noise, low power (11 milliwatt (mW)) microprocessor-based control chip designed by Teledyne Imaging Sensor. Its small size will allow it to be mounted close to the detectors, minimizing noise due to signal travel. The low power consumption of SIDECAR ASIC is crucial for maintaining the low temperatures needed for these detectors.

Since the Hubble space telescope became operational in 1990, it has made a number of important contributions to science. These include successfully constraining the Hubble constant to within ±10%, discovering that the expansion of the universe is accelerating (attributed to dark energy), observing black holes in galactic cores, witnessing the collision of the comet Shoemaker-Levy 9 with Jupiter in 1994, observing proto-planetary disks in the Orion Nebula, finding evidence of extrasolar planets and studying Kuiper belt objects. The resulting images it produced and the impact it had on science ushered in a golden age of astronomy.

The JWST is expected to build upon Hubble's scientific discoveries by peering farther back in time and trying to answer some of the questions raised by Hubble's discoveries. Its technology is already finding its way into consumer imaging and data processing devices. Three years from now, when the JWST settles into its L2 orbit and begins to peer into the distant reaches of the universe, it may well mark the start of another leap for scientific discovery.