A scientific team from the Institute for Basic Science (IBS), in South Korea, has created a wearable graphene-based patch that uses human sweat to enable diabetes monitoring and feedback therapy.

The patch is applied to the skin, and glucose monitoring begins upon sweat generation. An average of 15 minutes elapses before the patch's sweat-uptake layer reaches a relative humidity of 80%, at which time glucose and pH measurements are initiated. 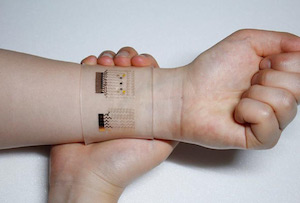 The patch is applied to the skin, and glucose monitoring begins upon sweat generation. Image credit: IBS.Precise measurement of sweat glucose concentrations are used to estimate the levels of glucose in the blood of a patient. If abnormally high levels of glucose are detected, a drug is released into a patient’s bloodstream via drug-loaded microneedles.

The malleable, semi-transparent device allows for easy and comfortable contact with human skin, keeping the sensors unaffected by any skin deformations. Connection of the device to a portable/wireless power supply and data transmission unit enables point-of-care treatment of diabetes.

During the team’s research, two healthy males participated in tests to demonstrate the sweat-based glucose sensing of the device. Glucose and pH levels of both subjects were recorded, and a statistical analysis confirmed the reliable correlation between sweat glucose data from the diabetes patch and those from commercial glucose tests.

The scientific team also demonstrated the therapeutic effects by experimenting on diabetic (db/db) mice. Treatment began by applying the device near the abdomen of the db mouse. Microneedles pierced the skin of the mouse and released Metformin, an insulin-regulating drug, into the bloodstream. The group treated with microneedles showed a significant suppression of blood glucose concentrations compared to control groups.

“Treatment with Metformin through the skin is more efficient than that through the digestive system because the drug is directly introduced into metabolic circulation through the skin,” says Kim Dae-Hyeong, a scientist from IBS' Center for Nanoparticle Research.