Biochemical information contained in human sweat can signal the onset of certain diseases and conditions. A sweat-based method for diagnosing cystic fibrosis (CF) has been in use for 70 years: patients remain immobile while electrodes stimulate sweat glands in their skin to provide sweat for the test. Collected samples are then sent to the lab to measure the chloride ions; high levels are an indicator of CF.

A faster and less cumbersome means of diagnosis – especially for pediatric patients—was developed by Stanford University and University of California (Berkeley) researchers. A sensor worn as a wristband collects sweat, measures its molecular constituents and electronically transmits the results for analysis and diagnostics.

The two-part system of flexible sensors and microprocessors sticks to the skin, stimulates the sweat glands and detects the presence of different molecules and ions based on their electrical signals. The more chloride in the sweat, the more electrical voltage is generated at the sensor’s surface. The team used the wearable sweat sensor in separate studies to detect chloride ion levels, and to compare levels of glucose in sweat to that in blood. High blood glucose levels can indicate diabetes. 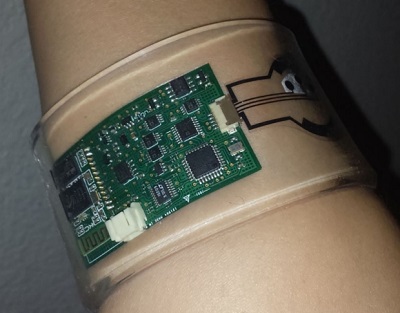 The technology can also be used to measure other molecular constituents of sweat, such as sodium and potassium ions and lactate. It can also help with drug development and drug personalization. CF is caused by any of hundreds of different mutations in the CF gene, so it’s possible to use the sensor to determine which drugs work best for which mutations.

Residents of underserved or remote communities in developing countries, where conventional testing is unavailable, could benefit from a portable, self-contained sweat sensor. The wearable device is robust and can be operated with a smartphone, which can send measurements to the cloud and receive a result right back after review at a specialized center. CF diagnosis, as well as other kinds of diagnoses, could be performed without needing a staff of skilled clinicians on duty and a well-equipped lab.

By posting a comment you confirm that you have read and accept our Posting Rules and Terms of Use.
Advertisement
RELATED ARTICLES
This sticker could detect cystic fibrosis
Wearable microfluidic platform tracks health by monitoring sweat
Scientist Develops Wearable Device Capable of Measuring Cortisol in Sweat
Wearable skin sensors that analyze sweat
Monitoring Sweat Biomarkers
Advertisement