Chinese bioenergy firm Kaidi plans to build a €1 billion biofuel refinery in Kemi, Finland that will use wood as the main feedstock to produce 200,000 tons of biofuels per year.

Kaidi says the second-generation biofuel plant—i.e., using biomass as a feedstock rather than the sugars and vegetable oils found in arable crops—will be the first of its kind not only in Finland, but globally. It will generate 75% biodiesel and 25% biogasoline. 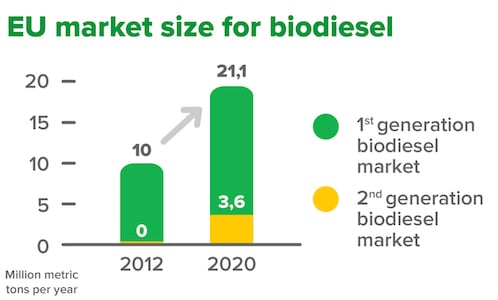 Among the project's goals, the company says, is to prove that high-quality biodiesel can be sustainably produced from wood-based biomass.

Kaidi’s technology is based on:

· Syngas cleanup that scrubs and filters unwanted or damaging impurities apart from hydrogen and carbon monoxide.

· The Fischer-Tropsch process to convert a hydrogen/carbon monoxide mixture into liquid hydrocarbons.

Kaidi says the biodiesel produced in the plant will be cleaner and of a higher quality than first-generation biodiesel. Additionally, the fuel will be able to be mixed with fossil diesel in any proportion, making it versatile and easy to use, according to the company.

Discussions with subcontractors and other stakeholders are ongoing, with a final investment decision to be made by the end of 2016. The building process would start in 2017 and the plant could be operational by the end of 2019.

By posting a comment you confirm that you have read and accept our Posting Rules and Terms of Use.
Advertisement
RELATED ARTICLES
Biomass for Energy: Yes or No?
Open-source software analyzes biorefinery and biofuel economics
Algal Biofuels: Closer to Sustainability?
Europe Supports Compact Gasification R&D for Drop-In Biofuels
Microorganism can produce biodiesel from cardboard
Advertisement