A team from Switzerland’s École Polytechnique Fédérale de Lausanne (EPFL) has enabled a flapping-wing robot — otherwise known as an ornithopter — to autonomously land on a horizontal perch using a claw-like device.

Using a 700 g ornithopter that was developed as part of the European project GRIFFIN, which aims to develop robotic birds that are powered by artificial intelligence (AI), the team trialed its claw-like mechanism. 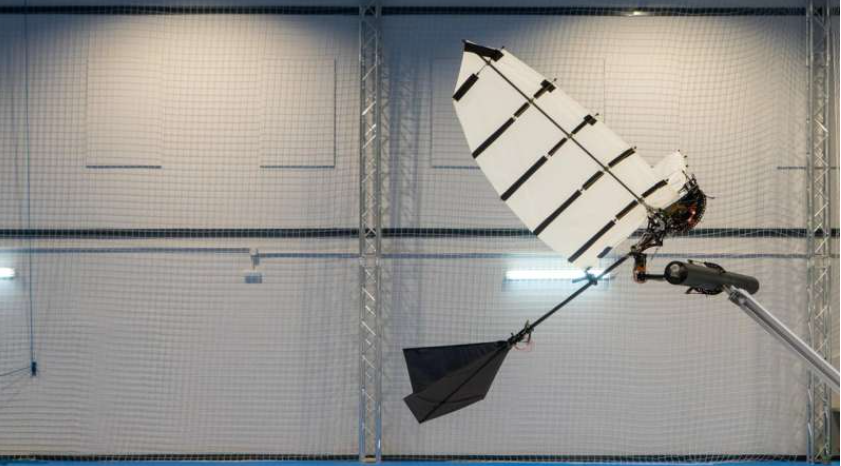 The EPFL team suggests that enabling a robotic flapping wing bird to successfully perch itself could lead to other more sophisticated tasks that can be carried out by ornithopters, including collecting biological samples or measurements from a tree, for instance.

To develop this capability, the researchers had to ensure that the ornithopter could slow itself down significantly enough to perch while still maintaining flight. Further, the claw needed to be able to grasp the perch while supporting the weight of the robot and the device needed to perceive its environment and the perch in front of it in relation to its own position, speed and trajectory.

To accomplish this, the ornithopter was outfitted with an on-board computer and navigation system and an external motion-capture system for determining its position. Likewise, the ornithopter's claw was calibrated to account for the up-and-down oscillations of flight and also designed to absorb its forward momentum upon impact.

Tests of the claw equipped drones have been successfully conducted in indoor environments, but the EPFL team envisions testing the claw-enhanced ornithopter outdoors.

The claw-enhanced ornithopter is detailed in the article, How ornithopters can perch autonomously on a branch, which appears in the journal Nature Communications.

For more information, watch the accompanying video that appears courtesy of EPFL.

By posting a comment you confirm that you have read and accept our Posting Rules and Terms of Use.
Advertisement
RELATED ARTICLES
"RoboBees" Can Perch to Save Energy
Video: Student projects solve unique fastener manufacturing challenge
Elephant-trunk inspired robot gripper handles everything from boxes to needles
Watch: Soft robot gently handles jellyfish to keep them calm
Marine Research Submarines to be Outfitted with Soft Robotic Arms
Advertisement