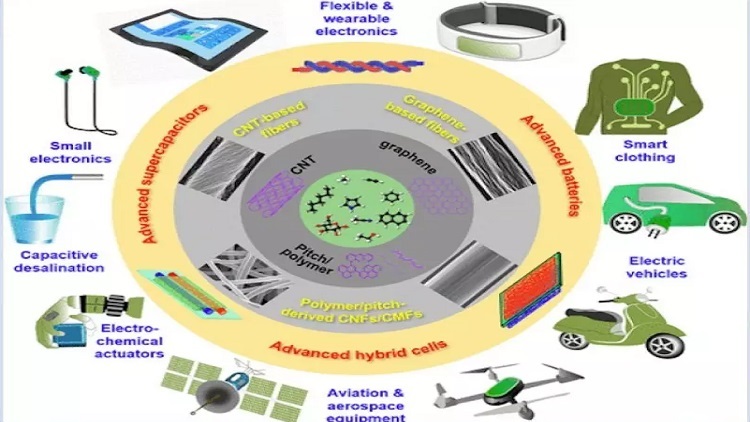 Advanced materials are under development to benefit the design and performance of catalysts, batteries, capacitors, supercapacitors and other energy storage devices. There is a growing need for efficient energy storage solutions due to the proliferation of modern technology such as electric cars (including hybrids), mobile electronics and renewable power sources. Researchers in academia and industry are responding to the growing need for energy storage materials by creating cutting-edge products that can be processed easily and have advantageous qualities for a variety of uses, including ecological ones. This article provides an overview of the carbon-based and polymer-based advanced materials for energy storage devices.

Research in carbon-based materials like graphene has skyrocketed since its separation as a single-atom-thick sheet of carbon by a group of scientists in 2004. Graphene oxide (GO) composites and reduced RGO composites are examples of graphene-based materials utilized in electrical energy storage systems. These composite devices improve the poor cycling behavior and capacity fading by adding a conductive polymer or metal oxide to the graphitic network, which greatly increases the electrical conductivity of the latter. To create functional nanomaterials with improved electrical conductivity, graphene makes an ideal matrix.

Energy storage technologies based on carbon, such as supercapacitors, have shown to be particularly well suited for high power uses because of their non-Faradaic charge storage method. In contrast, pseudocapacitors operate by a quick reversible Faradaic redox interaction between electroactive/conducting polymers or metal oxides and ions in the electrolyte. Electroactive materials that have been shown to work well in pseudocapacitors include transition metal oxides and conducting polymers and hydroxides.

As discussed above, because of its non-Faradaic charge storage medium (electric double layer), carbon-based energy storage devices, such as supercapacitors, have been shown to be ideal for high-power applications. It is commonly known that electric double layer capacitors (EDLC) store charge by means of the electrostatic force of carbon-based electrode materials. The shape, porosity, and size distribution of these carbon compounds are all different. Carbon spheres, carbon nanotubes, activated carbon and reduced graphene are all commonly used carbon-based electrode materials.

However, EDLCs, commonly known as supercapacitors because of their high-power density and outstanding cycle stability, are among the most promising candidates for meeting rising energy demands and addressing environmental issues. The most popular and essential electrode possibilities for EDLC are porous carbon materials such as carbide-derived carbon, activated carbon, carbon aerogels, organized mesoporous carbons and carbon nanotubes.

Similar to a standard electrolytic capacitor, carbon-based EDLCs store charge electrostatically in a double Helmholtz layer between its electrodes and electrolyte. Contrarily, conducting polymers (pseudo-capacitors) are electrochemical capacitors that store energy via a Faradaic redox mechanism, similar to batteries. Activated carbon is the prototypical material for EDLC electrodes because of its great power performance but low energy density. In a superficial manner, pseudocapacitors (electrochemical capacitors) store charge via a redox reaction. This imparts superior power performance and lifespan cycling compared to batteries, while still providing a high energy density compared to EDLCs. When compared to other pseudo-capacitive materials, those based on conducting polymers have several advantages, including minimal price, large specific power and energy, high conductivity, light weight and increased flexibility.

When a significant quantity of charge must be swiftly distributed, electrochemical capacitors are preferable over batteries due to their lower energy density while being on par with capacitors in terms of power density. Polyaniline, polythiophene, polypyrrole and poly (3,4-ethylene dioxythiophene) are some of the leading conducting polymers that have emerged as the basis for pseudocapacitor device development. These conjugated polymers are very desirable for use in cutting-edge energy storage materials and device fabrications due to their shared features, which include a delocalized electron system, the ability to regulate physical properties and access to redox states.

[Discover suppliers of supercapacitors and learn more about this technology on GlobalSpec.com].

The proliferation of mobile gadgets and electric vehicles throughout the world has stimulated the development of energy storage technologies such as batteries and supercapacitors toward better power density and energy density. This is heavily reliant on the development of advanced materials for usage in these applications. Carbon- and polymer-based composites such as reduced graphene and polyaniline are very promising materials for advanced energy storage systems. These composites significantly enhance performance metrics including energy density, specific capacity, rate capability and cycle life. Energy storage materials are also essential for the widespread adoption of renewable power sources because of their role in facilitating the safe, clean and flexible utilization of energy.

By posting a comment you confirm that you have read and accept our Posting Rules and Terms of Use.
Advertisement
RELATED ARTICLES
Supercapacitors as energy storage devices
Laser-induced Graphene Shows Promise for Electronics
Trends in the design and application of different capacitor types
Stretchy Micro-Supercapacitors Could Power Soft Robots
Hybrid Electrolytic-Electrochemical Capacitors
Advertisement