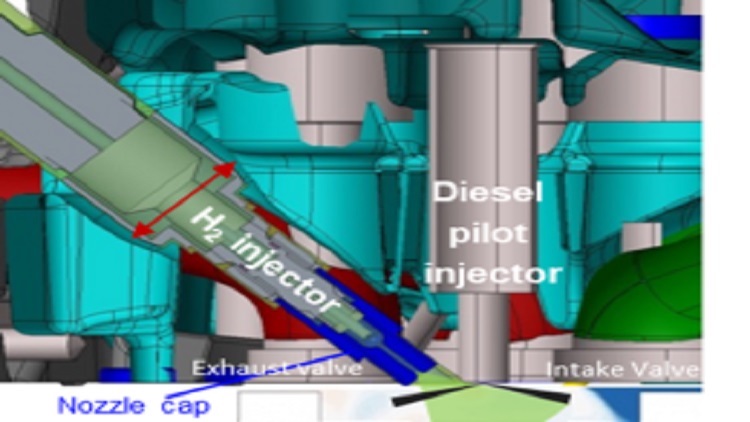 Diesel engines deployed in trucks and power equipment in the transportation, agriculture and mining sectors can be retrofitted to hydrogen-diesel hybrid engines with new conversion technology devised at the University of New South Wales, Australia.

The hydrogen-diesel direct injection dual-fuel system enables existing diesel engines to operate using 90% hydrogen as fuel and reduce carbon dioxide emissions by more than 85%. A hydrogen fuel injection system is added directly into the cylinder to complement the original diesel injection scheme. The dual-fuel system does not require extremely high purity hydrogen, which must be used in alternative hydrogen fuel cell systems and is more expensive to produce.

Compared to existing diesel engines, an efficiency gain exceeding 26% has been demonstrated in the diesel-hydrogen hybrid. This improvement is attributed to independent control of hydrogen direct injection timing and diesel injection timing to enable full control of combustion modes. Such specifically timed hydrogen direct injection controls the mixture condition inside the cylinder of the engine, which also curbs the nitrogen oxide emissions that have posed an obstacle to hydrogen engine commercialization.

The researchers expect to commercialize the new system described in the International Journal of Hydrogen Energy in the next 12 to 24 months.

By posting a comment you confirm that you have read and accept our Posting Rules and Terms of Use.
Re: Diesel engines modified to accept hydrogen
#1

This has a lot of potential when the diesel fuel itself could be made from captured CO2 and Green Hydrogen. If the hydrogen was made on site by electrolysis could the oxygen be used to boost the efficiency some more, or would that heat things up and produce more NOX??