Verdagy, a pioneer in scaling electrolyzer technologies for industrial markets, demonstrated the commercial efficacy of its water electrolysis technology, eDynamic, with two milestones on the path to cost-effective hydrogen at scale. Verdagy is engineering the world's largest membrane-based electrochemical cells to drive down the investment and energy required for generating industrial hydrogen. The recent successful pilots validate the durability and scalability of its technology: 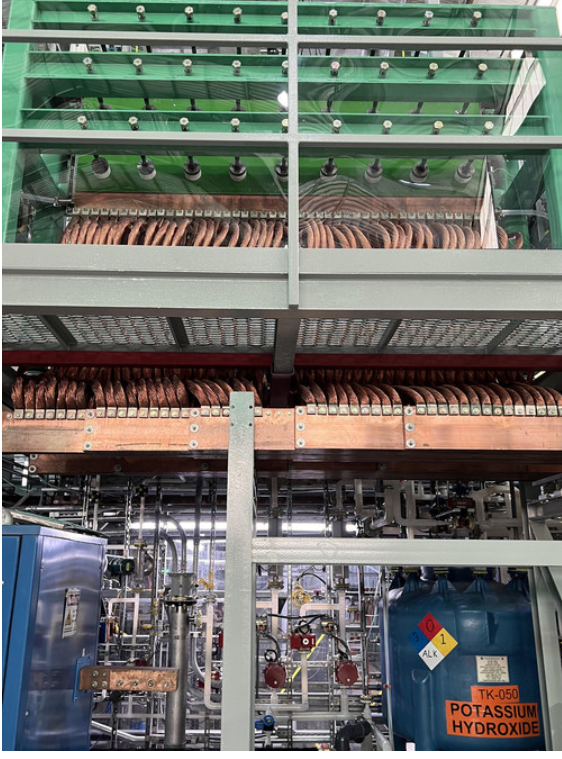 Momentum continues to build around green hydrogen as a means to meet decarbonization goals around the world and combat climate change, offering an alternative, low-carbon energy source — with an industry-wide goal of achieving the lowest cost/kg. Electrolyzers separate the hydrogen and oxygen in water to create low-carbon energy carrying hydrogen molecules; Verdagy's eDynamic process is designed to rapidly change operating parameters to integrate with renewables and capture the most optimal input energy pricing. Verdagy has demonstrated its ability to solve electrolysis challenges for industrial markets through rapid scaling, evolving first with its original lab cells, then pilot cells, followed by the 1,000-hour run demonstration, and now the commissioning of its 500 kW electrolyzer module.

The three 28,500 cm2 cells in the newly launched commercial module produce hydrogen at a rate of greater than 3.0 kg/hr per cell, validating their patented cell architecture and design that enables high current densities in a large format cell. This represents industry-leading current density operations that are higher than traditional and state-of-the art alkaline water electrolyzers, exceeding expectations for performance.

The launch of their commercial cell was preceded by the 1,000-hour run on a 20 kW, 3200 cm2 cell in a production environment at Verdagy's pilot plant in Moss Landing, California. The 1,000-hour run demonstrated lifetime durability and minimized risk as they scaled up to the commercial electrolyzer module. Through multiple runs, Verdagy validated its cell design, optimized their components and established process parameters to package their cells for commercial use.

Verdagy is designing for efficiency and affordability, with a wide dynamic operating range. The large dynamic range offers higher efficiencies at lower current densities and greater productivity at higher current densities. Without dependency on costly noble metals such as platinum and titanium, and due to the very large size and ability to run at high current densities, Verdagy achieves the lowest CapEx in the industry and the lowest hydrogen production costs when coupled with renewable energy. In addition to direct industrial use of hydrogen, Verdagy's electrolyzers provide solutions for the storage of renewable energy by producing green hydrogen that can be converted into ammonia or methanol.

As Verdagy is moving rapidly to commercially launch their 20 MW eDynamic product, both the 1,000-hour run and the launch of their commercial electrolyzer module represent major milestones in their mission to produce cost-effective hydrogen for industry at scale. Both demonstrate the technical readiness of Verdagy's integrated process, which includes safety controls, sensors and process integration in a fully automated pilot plant, all based on Verdagy's patented cell and membrane architecture.

3Kg H per hour from 20 Kw power. How does that stack up costwise.? What is the target price for selling the Hydrogen ? What form does it take after leaving the cell ?