Shape memory alloys (SMAs) are materials that can be deformed, but then heated and returned to their original geometry. An SMA is not melted, simply heated above a transition temperature that causes the atoms to realign to their original crystal structure. SMAs are sometimes called “memory metal” or “memory wire” because of this effect.

SMAs have been around for a few decades, yet new applications for their uses are being constantly developed. At one point, the U.S. Air Force was investigating their use for developing wingtips that could change shape through aerodynamic deformation or electrical resistance heating as needed.

What is an SMA

SMAs rely on a specific crystallographic structure and a controlled solid-state phase transformation to exhibit these unusual properties. The shape-memory effect is found in certain nickel-titanium (NiTi) and copper-aluminum-nickel alloys, though a few other alloys have this property. NiTi is by far the most common SMA.

The original geometry is formed when the alloy is cooled from higher temperatures. At higher temperatures (still below the melting temperature), the alloy is in the austenite solid phase. As it cools, the austenite transitions into the martensite solid phase. During this transition, no bonds are broken, even though the two phases have slightly different crystal structures. Instead, the bonds twist to form a grain structure known as “twins” where some grains have a mirror image from one another. 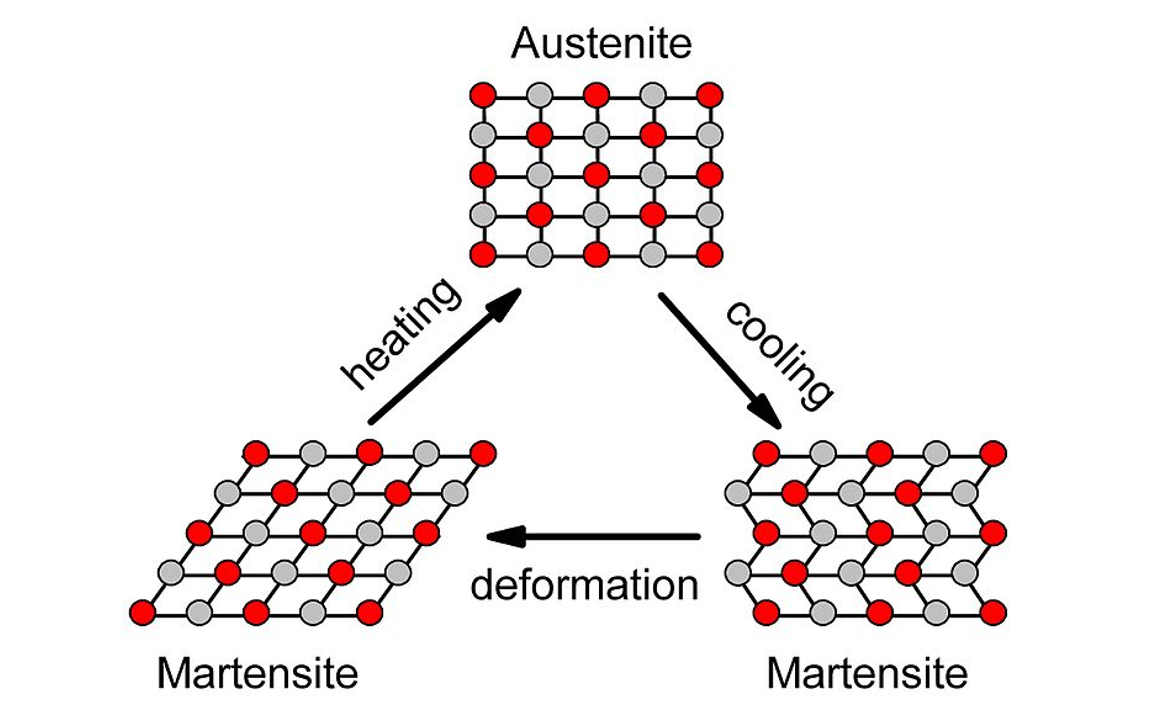 From casting and hot drawing, austenite cools to martensite (right side of this diagram). The martensitic form is deformed at lower temperature, such as room temperature, forming the graphic on the bottom left. The material is then heated, transitioning to austenite, and then cooling back to the un-deformed martensite. Source: Mmm-jun/CC BY-SA 3.0

The martensite phase of SMA alloys must form “twins,” or mirrored grains in its microstructure. Without going into a lot of detail about twinning and “detwinning,” the twins give the material more possible paths for deformation. When the SMA is deformed, the material “detwins”, rather than undergoing standard dislocation motion along slip plains. However, when the material is heated again, the material twins, returning it to its original shape.

While multiple configurations of these SMAs are possible, the most common SMA shape is that of wire. The wire can be deformed easily and then reheats quickly versus an SMA plate, which would require much energy to deform and heat again.

The ability to be deformed but then “spring” back to an original shape has been used extensively in small sensors and actuators. Tiny valves and springs made from SMAs have been used in prosthetics, fluid control in hydraulic systems and other such uses.

Their use in control systems has been investigated in numerous applications, such as mechanical timers, where initial deformation is corrected through heating, eventually opening the circuit to stop the heating. Small antenna systems see some potential in SMAs, as an antenna impedance mismatch can lead to heating, meaning the antenna would change shape until an impedance match is created.

SMAs are being used in buildings and pipelines. As microcracks develop, the SMA wires can sense these cracks and change shape to relieve stress and prevent the cracks from growing.

Roadblocks and barriers to widespread adoption

SMAs are normally cast and drawn under vacuum. The vacuum casting process can be extremely expensive and thus SMA production is often limited to facilities that are already producing nickel-based superalloys. Even in these vacuum foundries, SMA production is currently not as profitable as other bulk superalloy production, limiting its production even further.

Another consideration is that the SMA action is slow. Compared to electronic controls, SMAs cannot respond quickly at all, limiting its use in control systems. However, some applications do not require a quick response time, and an SMA may be appropriate in this case.

The future of SMAs

As with any novel material, future research in SMAs will improve some of the material properties, such as increased response time and decreased activation due to accidental or environmental heating. Manufacturing developments will decrease their cost and allow for more economical research and use, meaning more applications will be developed.

In the aerospace industry, there is still quite a bit of interest in SMAs for various systems that must change during flight. 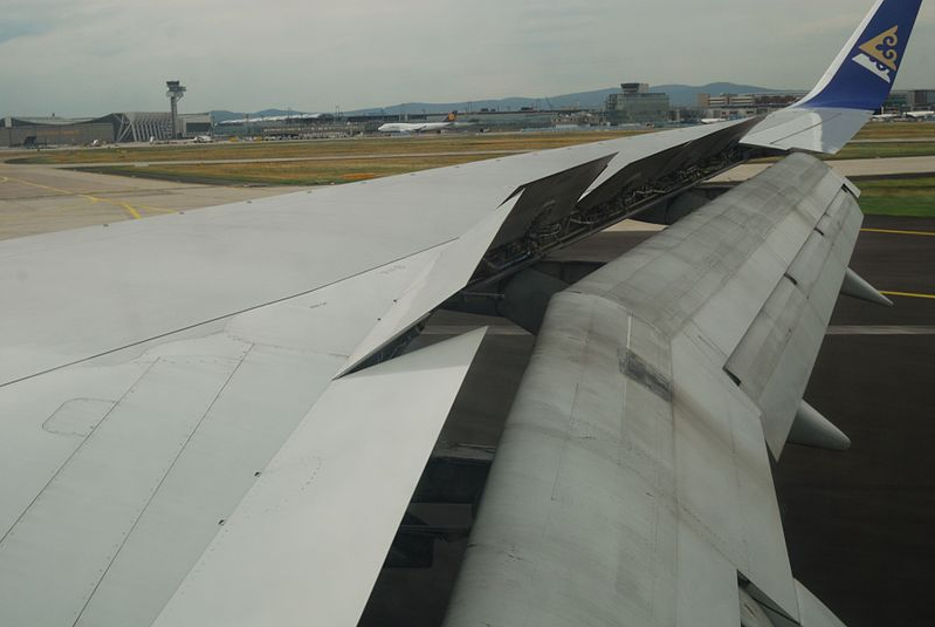 An airplane wing during landing. Some of these components could be replaced by a shape memory alloy. Source: Wing/CC BY-SA 3.0

Researchers at Texas A&M have been developing a way to quiet the wings of landing aircraft using SMAs. Currently, wings change shape using hydraulic systems to create drag during landing, including a wing tip that extends outward, leaving a void. This void leads to turbulent flow, which generates noise and vibration. During takeoff, the engines make most of the noise, but during the initial stages of landing much of the noise is generated from turbulence in the air flowing around the wing. The end result: a much quieter and less mechanically taxing landing for aircraft.

Wings and wingtips can also be modified using SMAs. Turbulence at the very end of the wing can lead to vibration, reduced fuel efficiency, noise and a host of other difficulties. Commercial passengers can often see the wing flexing during flight. One method to combat this is to adjust the rigidity of the wings by incorporating SMA wire or net in a composite to form the body of the wing. When the wing needs increased stiffness, the wire is heated, causing it to straighten and retain its shape. When the wing needs to flex, the wire is allowed to cool and deform slightly.

From its initial development, SMAs have always offered promise to the aerospace industry. In the next few years, their usage will likely expand into new applications. SMAs had a slow start, but their secrets are slowly being unlocked and new developments will continue to take advantage of their unique properties.

By posting a comment you confirm that you have read and accept our Posting Rules and Terms of Use.
Advertisement
RELATED ARTICLES
Morphing Wing Created Using Smart Materials and Actuators
Built in the U.S.A.: Improving a Bridge's Seismic Resistance
Innovative Cooling Process for Refrigeration
Innovative Building Materials that will Impact Future Architecture
Underwater brittle star-inspired robot crawls underwater
Advertisement